by Bartholomew Madukwe
in Nigeria, Top Story
Reading Time: 2 mins read
A A
0 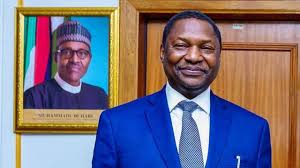 The Attorney General of the Federation (AGF) and Minister of Justice, Abubakar Malami and others have been restrained by the Court of Appeal from taking steps to frustrate the hearing of an appeal against a judgment mandating the AGF to delete Section 84 (12) from the amended Electoral Act.

A three-member panel of the court, led by Justice Rita Nosakhare Pemu, in a ruling, granted the Peoples Democratic Party (PDP) permission to appeal, as an interested party, against the March 18, 2022 judgment by Justice Justice Evelyn Anyadike of the Federal High Court in Umuahia.

The Appeal Court, in the ruling delivered by Owerri division on April 7, 2022, an enrolled copy of which The Nation sighted in Abuja on Sunday, also granted accelerated hearing in the appeal.

The ruling was on a motion marked: CA/OW/87m/2022 filed by the PDP, with Chief Nduka Edede (plaintiff in the suit decided by Justice Anyadike) and the AGF as respondents.

It reads: ” Leave is hereby granted the applicant (PDP) to appeal as person interested in this appeal – CA/OW/87/2022.

“Due to the exigencies of this appeal and its constitutional colourisation, there is need to hear this matter expeditiously.

“Accordingly, the appellant is hereby given up to Tuesday 12th of April, 2022 to file its notice of appeal and the parties are to file their respective briefs of arguments within three days from the date of service of the notice and record of appeal on the respondents.

“Parties should desist from taking any step to frustrate the hearing of the appeal.

“The matter is adjourned to the 4th of May, 2022, for the hearing of the appeal.

“Fresh hearing notice to be issued on the 2nd to the 12th respondents.”

The National Assembly has also indicated its intention to formally appeal the judgment by Justice Anyadike.

Justice Anyadike had, in the March 18 judgment in the suit by Edede, marked: FHC/UM/CS/26/2022 held that Section 18(12) of th amended Electoral Act is unconstitutional and should be struck down.

She held that any other law that mandates such appointees to resign or leave office at any time before the 30 days provided in the Constitution was unconstitutional and void to the extent of its inconsistency with the clear provisions of the Constitution.

Justice Anyadike then ordered the AGF to delete the said Section 18(12) from the amended Electoral Act.

Section 84(12) of the Electoral Act provides: “No political appointee at any level shall be a voting delegate or be voted for at the convention or congress of any political party for the purpose of the nomination of candidates for any election.”

The PDP has already filed a separate suit before the Federal High Court in Abuja in which it is challenging among others, President Muhammadu Bujari’s request that the National Assembly alters the provision of Section 84(12) of the Electoral Act.

The case marked: FHC/ABJ/CS/247/2022, now before Justice Inyang Ekwo has been adjourned till April 28 for hearing.

What every man should do before getting married – Comic relief actor, Ijebuu

What every man should do before getting married - Comic relief actor, Ijebuu