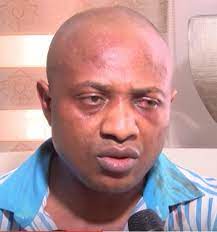 Convicted kidnap kingpin, Chukwudumeme Onwuamadike, a.k.a. Evans, has been given 14 days, by the Lagos High Court sitting at the Tafawa Balewa Square (TBS), to file his statement of defence in a suit filed against him by one of his victims, Chief Donatus Dunu.

Justice Kayode Ogunjobi in his ruling held that the principle of fair hearing demands that the defendant be given opportunity to defend himself.

Court fixes May 20 for judgment on Dane accused of killing wife, daughter

The claimant is demanding return of the sum of £223,000 he paid as ransom while
he was in custody of the kidnap kingpin before he eventually escaped.

He is also demanding the sum of N50million as damages as well as 20 per cent per annum until judgment and its final liquidation.

The claimant had instituted the suit on the 16th May 2018 and served the defendant through the Comptroller General of Prison Kirikiri maximum prison Lagos.

The defendant was initially represented by a lawyer in March 2019 and was accorded every opportunity to defend the suit but failed to do so.

However, when the claimant closed his case on March 3, 2022, the defendant came back seeking leave of court to defend himself.

According to Evans, he has been in prison custody since August 2017 and was not aware of the pendency of this action.

He stated that he became aware of the suit in 2019 when he was already out of time to file his defence.

He said immediately he became aware of the suit, he contracted a lawyer to defend him.

The defendant added that sometimes in March 2022, he, through his family, contracted his lawyer to find out the position of the matter only to be informed that the law firm had ceased representing him and that the law firm was yet to file statement of defence in the suit.

The kidnap victim stated that he later discovered that the trial had been concluded without him being represented.

Opposing the request, the claimant argued that the defendant had lost the opportunity to open his defence and cross-examine the claimant’s witnesses.

The claimant argued that one of his witnesses now lives outside the country and that he (claimant) no longer has the capacity to testify again due to the emotional and mental trauma he suffered while giving his testimony in court.

In his ruling, Justice Ogunjobi held that in the interest of fair hearing the defendant should be given the opportunity to defend himself.

The judge held that “From the record of the proceedings, I hold that the defendant was given the opportunity to defend himself. Be that as it may, the defendant should be given opportunity to enter his defence in the interest of justice and for the determination of the suit on its merit.

The judge observed that the claimant closed his case on 3rd of March 2022, adding that the averments of the claimant were not controverted by the defendant.

Refusing Evans’ prayer to cross-examine claimant’s witnesses, Justice Ogunjobi held that Evans had not placed any material before the court to warrant the claimant to reopen his case.

The matter has been adjourned till June 29, 2022 for the defendant to open his defence.

[Devotional] IN HIS PRESENCE: The Word of God [1]

[Devotional] IN HIS PRESENCE: The Word of God [1]

Amaechi in Katsina: ‘I will fight poverty, insecurity’