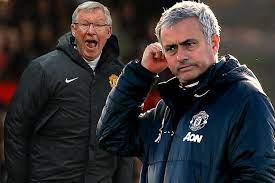 The phrase ‘squeaky bum time’, which was coined by Sir Alexander Ferguson, and former Chelsea boss, Jose Mourinho, expression ‘parking the bus’ have been found among the new words added in the recent quarterly update of the Oxford English Dictionary.

The iconic quips from Ferguson and Mourinho have made their way into the Oxford English Dictionary.

The legendary former Manchester United manager and uber-successful ex- Chelsea boss were both renowned for coming up with memorable phrases during their time in the Premier League, whether in the heat of angry post-match interviews or during witty weekly press conferences.

The Oxford English Dictionary has issued its quarterly update which includes a fresh batch of football-related terms ahead of this year’s World Cup in Qatar.

Acknowledging the additions, the OED said: “There’s a World Cup kicking off in November, and while the OED already covered a large number of football terms, from catenaccio to nutmeg to water carrier, this select batch of fifteen additions fills a few gaps in our formation.”

Ferguson’s “squeaky bum time” was first said by now-retired Scot 19 years ago in a dig at rivals Arsenal, who were challenging for the Premier League title towards the end of the 2002-03 season.

Still used to this day by fans, players, managers and pundits, the OED’s description reads: “A particularly tense period of time, esp. one leading up to the climax of a competition or event.”

Ferguson’s original use of the phrase came when he said of Arsenal’s run-in: “They have a replay against Chelsea and if they win it they would face a semi-final three days before playing us in the league. But then they did say they were going to win the treble, didn’t they? It’s squeaky bum time and we’ve got the experience now to cope.”

As Roma’s current coach Jose Mourinho who is known for his tactical prowess, game management, and adaptability to different situations, coined the ‘parking the bus’ phrase when criticizing Tottenham for setting up in a similar fashion against his team in the 2004-05 season.