REVEALED: Aircraft that killed Chief of Army Staff second to crash in fleet of 4 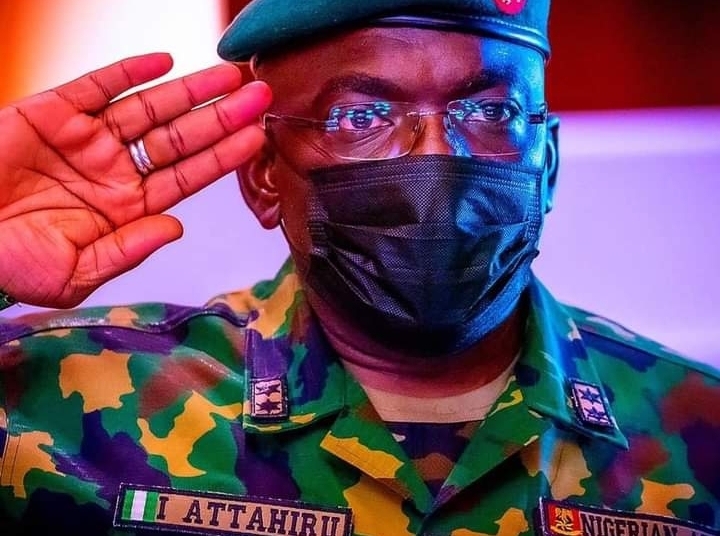 …two crashes in less than 3 months

It has been revealed that the aircraft that crashed, killing the Chief of Army Staff, Lt Gen Ibrahim Attahiru is the second in a fleet of four aircraft registered at same time to crash within a space of less than three months.

TheNewsGuru.com (TNG) gathers that the Chief of Army Staff died in a crashed King Air 350 aircraft, the same variant of aircraft that crashed in February, killing all seven Nigerian Air Force (NAF) officers on board.

FG returns repentant terrorists back to their communities

The crash of the King Air 350 military aircraft that killed the Chief of Army Staff, and ten other persons has sent fear over the Nigerian military of possible fatal crashes occurring in the near future.

The names of those who died along with the Chief of Army Staff were given as Brig Gen MI Abdulkadir, Brig Gen Olayinka, Brig Gen Kuliya, Major LA Hayat, Major Hamza, Sgt Umar.

Others are pilot FLT LT Taiwo Olufemi Asaniyi, who is said to have plans to marry in a few weeks; co-pilot Flt. Lt Alfred Olufade, who had his wedding two months ago, and also Sergeant Adesina and ACM Oyedepo, among the crew.

With the development, at least 20 military officers have lost their lives in the last three months in three crashes involving Nigerian military jets.

Recall that in February, NAF confirmed the crash of a Beechcraft King Air 350 military aircraft, the same variant of aircraft that crashed killing Attahiru and the 10 others on Friday.

The aircraft departed Abuja on a Sunday, in the morning, before it crashed, killing all the persons on board.

According to the Twitter handle of Sen. Hadi Sirika, Minister of Aviation, the aircraft reported engine failure at 10.39 a.m. and crashed landed on the final approach path of Abuja Runway 22.

All the seven personnel on board died in the crash, and the then Chief of Air Staff, AVM Oladayo Amao directed an immediate investigation into the incident, but the outcome of the investigation was yet to be made public.

Two officers were onboard the missing jet which was later declared crashed and the whereabouts of the two airmen unknown till date.

TNG reports there are different variants of the King Air 350 aircraft designed and manufactured by Beechcraft Augsburg, a subsidiary of Textron Aviation.

The King Air 350 aircraft was first manufactured by Beecrhcraft Aviation in 1963, and expanded in 2008 for multi-civility purposes.

The multi-mission King Air 350ER aircraft is a derivative of King Air 350 and it is the most preferred because it is designed to fly a unique mission profile as it incorporates advanced technology and a unique and flexible mission package.

That extra takeoff weight allows the 350ER to pack on another 1,581 pounds of fuel for a total capacity of 5,192 pounds.

The cabin is 5.94m long, 1.45m high and 1.37m wide. It can accommodate two crew and up to eleven passengers. It can be optionally fitted with two additional fold up seats.

The 350ER is developed to perform a range of special missions for the military and law enforcement authorities.

The standard price of a 350ER is about $7.2 million, which is about $1 million more than the standard King Air 350. The empty weight of the 350ER is higher than the regular 350, but the engines and wings are the same.

An obvious special mission for an airplane with such fuel capacity is observation where loitering aloft with a big load of sensors is the goal. The 350ER can easily stay on station for more than 12 hours.

Another reason people want a 350ER is to reach destinations where fuel supply is not available. The big turboprop can fly into rugged, out of the way runways to deliver or pickup people or cargo and have enough fuel to make the return trip.

So, what is going wrong?

With the death of the Chief of Army Staff on Friday and the death of seven naval officers in February, this is the second time two Beechcraft King Air 350 aircraft in a fleet of four, acquired by the federal government of Nigeria, will crash.

While many have asked why the aircraft keeps crashing, till date, the investigation directed by the former Chief of Air Staff on the crash of the Beechcraft King Air 350 aircraft in February was yet to be made public.

Beechcraft, maker of the King Air 350 had touted the special mission military aircraft as very reliable, and no words from the manufacturer of any defects, but there is apprehension in the air.

In early 2014, the Mexican Navy Secretaría de Marina (SEMAR) signed a contract with Beechcraft for the delivery of four aircrafts.

The aircraft is also in service with the US Marine Corps.

Nigeria has four of that aircraft, two that have crashed fatally, but what is going wrong is not known.

In February, NAF201 crashed in Abuja and killed all seven Airforce men on board as reported. Now, NAF203 has crashed, killing everyone onboard, including Attahiru, the Chief of Army Staff.

Presently, there is fear in the military with the remaining aircraft, NAF202 and NAF204. Many have said it is time to ground NAF202 and NAF204 to avoid further fatal crashes from the fleet.

Meanwhile, the Chief of Defence Staff (CDS), General Lucky Irabor has directed that an Accident Investigation Board be constituted to unravel the immediate and remote cause(s) of the unfortunate accident.

In a similar vein, a pro democracy and human rights group known as Concerned Nigerians for the Protection of Human Rights and Rule of Law initiative has enjoined President Muhammadu Buhari to employ the services of Independent Air Accident experts to investigate the cause of Nigerian Air Force jet that killed Nigerian Chief of Army Staff, General Ibrahim Attahiru and others.

The group in a statement made available to newsmen said, the cause of the plane crash that claimed the lives of the Chief of Army Staff and other military generals must be thoroughly investigated by independent Air Accident experts.

The statement reads in part:

“Our heartfelt condolences are with the families of the Chief of Army Staff, the Airforce crew and other generals who lost their lives in the ill-fated crash that occurred in Kaduna International Airport.

“We call on the president to launch an inquest into the cause of the crash that claimed the lives of some of our finest officers by employing the services of an Independent Air Accident experts. It can not be a coincidence that three Nigerian Airforce jets have crashed in a space of 3 months. Something is fundamentally wrong somewhere and the onus is on the president to uncover this mysterious crashes”.

The group through its convener, Deji Adeyanju also stated that it appears the various security agencies have been compromised.

“We are worried that the security agencies may have been compromised. We have always condemned the idea of granting former Boko Haram fighters amnesty and the dire consequences of enlisting them into the army and other security forces.

“The cabinet of the president and our security agencies are filled with terrorist sympathizers. Unless the president rids his administration of these unscrupulous elements that have infiltrated his cabinet, the war against insurgency will continue to be a mirage.

“Moreover, we are calling on the president and his Vice to suspend every traveling activities by air pending the outcome of a comprehensive report on the numerous Airforce plane crashes by the Independent Air Accident experts earlier recommended,” the statement added.

Adeyanju prays almighty God grant all the victims of the crash and galant officers who lost their lives fighting for Nigeria, eternal repose.