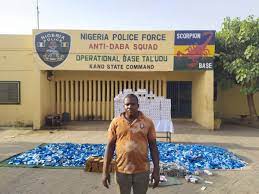 A 27-year-old notorious dealer of fake drugs, Chibezie Onocha, has been arrested by Kano State Police, at Sabon Gari Quarters in the state.

Spokesman of the Command, SP Abdullahi Haruna Kiyawa, stated this in a press statement.

He said the suspect was arrested by a team of Operation Puff Adder while on intelligence-led surveillance patrol along IBB Road Kano.

According to him” suspected fake and intoxicating drugs were recovered from him include; (i) One Hundred (100) Packets of Rubber Solution, (ii) Five (5) Cartons of Buscomac Tablets, (iii) Three (3) Cartons of GVN Griseofulvin Tablets (iv) Two (2) Cartons of Healmoxy Capsules, all valued Two Million, Five Hundred and Sixty Thousand Naira (2,560,000:00).

He said during the investigation, the suspect confessed that the drugs were fake and he transported them from Lagos to Kano, with the intent to take and sell them in the Niger Republic.

Kiyawa said the State Commissioner of Police had directed a discreet investigation, after which the suspect will be charged to court for prosecution.