by Ediri Oyibo
in Entertainment
Reading Time: 1 min read
A A
0 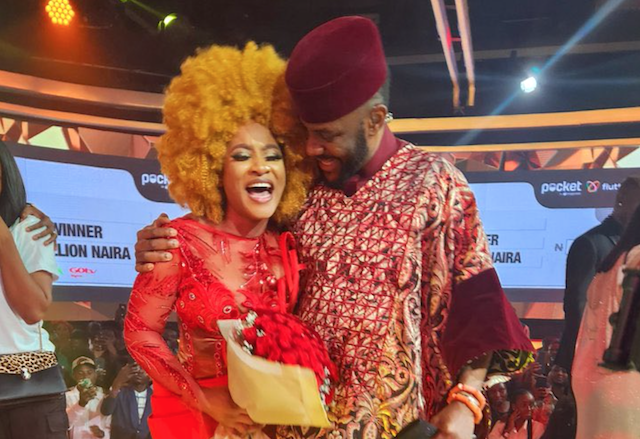 Winner of Big Brother Naija (BBNaija) Season 7, Josephina Otabor, popularly known as Phyna, has described her time in the BBNaija Level Up house as amazing.

TheNewsGuru.com (TNG) reports Phyna on Sunday emerged as the winner of the television reality show, defeating Bryann, who emerged as the first runner-up of the show.

This year’s season tagged “Level Up” saw 28 housemates compete for the grand prize worth N100 million.

Phyna edged out the five other finalists Bryan, Bella, Adekunle, Chichi and Daniella to clinch the coveted status of winner.

As the winner, the 25-year-old Phyna gets N50 million cash prize, a new SUV from  Innosons Motors, a Dubai trip for two, a year’s supply of Pepsi, a new techno phone-Camon 19, a supply of Unik soap and a supply of home appliances from Nexus among other mouth-watering prizes.

The Edo-born actress who was elated screamed upon the announcement of her victory by the host of the show, Ebuka Obi-Uchendu.

Before the announcement, Phyna said the journey had been an amazing and splendid one as she waits to embrace everything great.

The show which began on July 23 and July 24 had 28 housemates who were evicted at different points of the show while six housemates made it to the grand finale.

Each of the housemates won prizes from different sponsors in the course of the show.

After spending 72 days in the Big Brother House, Bryann emerged as the first runner-up while Bella was declared the second runner-up.

The fans of the show were thrilled with performances from Nigerian artists, MI, Falz and Pheelz.