by Bartholomew Madukwe
in Crime Watch, Entertainment
Reading Time: 3 mins read
A A
0 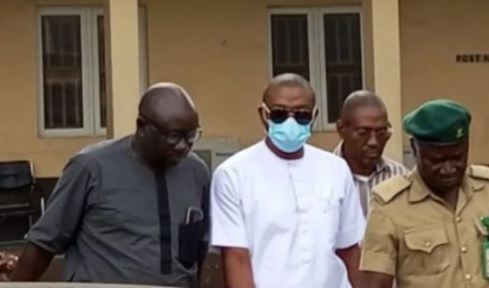 Popular Nigerian comedienne, Damilola Adekoya, fondly known as Princess, has stressed that as a Nollywood actor, Baba Ijesha, and a medical practitioner, Dr Femi Olaleye, have been taken to prison over rape accusation, the next person would be a pastor.

The comedienne called for celebration as Dr Olaleye, the Managing Director of Optimal Cancer Care Foundation, on Wednesday, was remanded at the Ikoyi Correctional facility pending the fulfilment of his bail conditions.

Princess was quite ecstatic over the video of Dr Olaleye being taken to Ikoyi Correctional Centre. She expressed joy at how rapists were now being held accountable for their actions.

A video of Dr Olaleye being led to the Ikoyi Correctional Centre pending the fulfilment of his bail conditions has surfaced.

The judge ordered that the defendant be remanded in Ikoyi Correctional Centre pending the perfection of his bail.

Dr Olaleye is facing a two-count charge of defilement and sexual assault by penetration of his wife’s 16-year-old niece.

He was arraigned by the Lagos state government on Wednesday at the Sexual Offences and Domestic Violence Court, in Ikeja area of Lagos.

The doctor pleaded not guilty to the charge preferred against him.

The court granted him a bail of N50m with two sureties in like sum.

On November 21, the scheduled arraignment of the cancer care advocate was stalled following his absence in court.

Reacting, comedienne Princess, who has become a vocal advocate for abused children after her foster daughter was sexually abused by actor Baba Ijesha, took to Instagram to express her satisfaction with the judge’s order.

During the trial on Wednesday, Babatunde Ogala SAN, counsel to the defendant, read out some portions of Olaleye’s bail application, which was earlier filed in the court.

Mr Ogala asked the court to admit the defendant on bail on the grounds that he is ready to attend all the trials for the case.

The lawyer also said that the defendant is a leading cancer care advocate, whose patients will suffer if remanded in prison during the course of the trial.

The senior lawyer said the offences levelled against his client are not “grievous allegations like treason” that warrants the death sentence.

The lawyer added that the behaviour exhibited by Olaleye as it relates to his voluntary presence in court shows that he will comply with the conditions of the court.

He said the defendants came to court with “reliable and liable” professional colleagues who are ready to stand as sureties for him if granted bail by the court.

Countering the bail application, Babatunde Martins, a lawyer with the state government, said the offences leveled against the defendant is a serious crime in Lagos, which attracts life imprisonment.

Mr Martins said the prosecution team is concerned that the defendant has the tendency to interfere with the case, owing to his relationship with the claimants — his wife and the minor, who is the survivor.

Mr Martins argued that Mr Olaleye is flight-risk because he owns the Nigerian passport and probably possesses a British passport.

He asked the court to impose bail conditions that will ensure that the defendant attends his trial.

Bail conditions
For the bail conditions, the presiding judge said the defendant should provide two sureties with N50 million in like sum.

The judge asked Mr Olaleye to submit his international passport, British passport and all travelling documents to the court’s clerk.

The court fixed 19 and 21 December, for the continuation of trial.