The Digital Bridge Institute (DBI) says it is collaborating with Cisco Networking Academy to intensify awareness on cybercrimes, as the menace of Internet fraud continues to eat deep into the fabric of the Nigerian society.
The Acting Administrator of DBI, Mrs Viola Usoro, on Tuesday in Lagos during the 2019 Cisco African Academy Cyber Security Conference for English West and Central Africa said that as more and more organisations adopted new ICT technologies in their operations and processes, cybercrimes or cyber attacks had become the greatest threats to every business.
She said that hundreds of attacks hit computer systems everywhere around the world, and according to her, it is estimated that 54 per cent of companies, the world over, experience at least one cyber attack every year.
“According to a survey by Sophos Nigeria limited and Sidmach Technologies, 60 per cent of businesses and organisations every year suffer cyber attack in the form of malware, phishing, Ransomware, Crypto jacking and so forth.
“92.4 per cent of these are delivered via email. Although most of these attacks are not covered by the media, they all lead to losses in millions of naira. The need for Cyber Security Framework underscores the importance of cybersecurity.
“Most businesses try to prevent cyber attacks by securing their networks using various Antivirus Software, establishing more secure networks, yet statistics show that a huge percentage of cyber breaches result from human errors. This re-emphasises the need for awareness creation and capacity building,” she said.
The Acting Administrator said that the conference put special focus on cyber security projects, creating a hub where significant stakeholders create awareness and build capacity on cyber security.
She said that DBI was established by the Nigerian Communications Commission (NCC) for the purpose of ICT capacity building across all economic sectors in Nigeria.
Usoro said that pursuant to this mandate, the Institute had in the past decade and a half, championed functional and innovative ICT education covering cyber security and other emerging technologies.
She said that in 2018, DBI along with other industry stakeholders formulated the National Operational Standards in ICT trade areas.
According to her, these standards, once approved by the National Board for Technical Education (NBTE), will form part of the National Skills Qualification Framework (NSQF) to help regulate trainers and professionals in the ICT industry in Nigeria.
“In 2015, DBI became one of the six centres of excellence in Africa in the ITU ICT Academy Network and one of our focus areas is cybersecurity, where DBI will offer training on Cybersecurity and Cyber Threat Mitigation Strategies.
“I am persuaded the Cisco Network Academy will chart a most effective roadmap for awareness creation and capacity building in cyber security for the coming years.
“We anticipate that the programme will identify new strategies to deter or outrightly prevent cyber attacks in our country.
“Afterall, it is in our collective interest for cyberspace to be safe, open and secure,” she said.
The General Manager, Cisco Systems West Africa, Kunle Oloruntimehin, said that the Academy planned to train one million students by 2025.
Oloruntimehin said that of the one million, 125,000 students would be trained on cybersecurity, of which most of them would be from Nigeria.
“There are two important things in life, which are education and digitisation, and these two things are delivered by Cisco Networking Academy,” he said.
Alfie Hamid, Regional Manager for Africa, Corporate Affairs, Cisco said that there was the need for partnership to curb cybercrime, toward socio-economic development.
Hamid said that digital disruption was happening rapidly, on a massive scale.
He said that unfortunately, digital disruption drove the hacker economy, creating an ever-evolving, dynamic threat landscape. 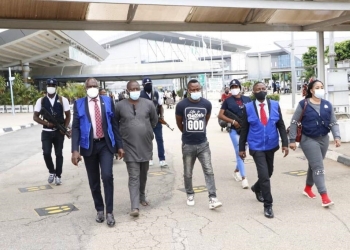