The Executive Vice Chairman of the Nigerian Communications Commission (NCC), Prof. Umar Danbatta has urged telecommunication consumers in Nasarawa State to be alert to the rising wave of Cybercrimes in the country.
Danbatta spoke at the 107th Edition of the Consumer Outreach Programme (COP) with the theme: “Mitigating Effects of Cybercrimes: The Roles of Telecom Consumers” held on Thursday in Lafia, Nasarawa State.
Represented by the Deputy Director, Consumer Affairs Bureau, Alhaji Ismail Adedigba, Danbatta explained that this was one of the fora initiated by the commission to bring together telecom consumers in the Urban and Suburban areas.
He explained that the aim was to sensitise telecom consumers on the rising wave of Cybercrime in its various forms, its dangers and the role telecoms consumers were expected to play in reducing the impacts of Cybercrimes.
He listed various ways they were adopting to perpetrate the crimes such as hacking, data identity theft, and sim card replacement methodology.
“Here, they will just shutdown your phone and before you know they have swindled all your money.
“Again, consumers should know what to do to protect themselves from being victims of these cyber criminals?
“We do not expect everybody in Nasarawa State to be here today but the registration is hitting about 1,000 people. We believe in the number of participations and in sharing of the information.
The executive vice chairman said that the commission also brings the service providers as well as the Regulator for a face-to-face interactions on telecoms issues affecting the consumers.
He said the various programmes have been put in place based on the commission’s understanding that telecom consumers group was one of the important stakeholders in the telecommunications industry.
He stressed the need to continuously keep stakeholders informed on new developments and issues of concern in the industry.
The NCC boss said realising that liberalisation of the telecoms industry had led to an unprecedented increase in the usage of internet-based solutions and services.
He also said that the commission had initiated a process to establish an Internet Industry Code of Practice for Internet Service providers in the country.
The Internet Code is a regulatory intervention expected to secure the country’s cyber space against imminent threats from cyber attackers as well as addressing issues such as online child protection, privacy and data protection among others.
“Let me emphasise at this juncture that while the regulatory intervention and other initiatives are ongoing to sanitise our internet space, telecoms consumers must play their role.
“Thus, the need for you all to take this meeting seriously as we educate you on what your roles should be in minimising the effect of Cybercrime.
“I urge you to come up with useful suggestions and observations you may have on how we can jointly play roles towards reducing the effects of Cybercrimes on telecoms consumers in this Broardband era,” he said.
In her remarks Mrs Felicia Onwuegbuchulam, Director, Consumer Affairs Bureau, said businesses and individuals in every country currently rely on Information and Communication Technology (ICT) for their day-to-day activities.
She said that continuous consumer education and awareness remain one of the most effective ways to protect telecom consumers.
“People complain to us about their money vanishing from their accounts, they go to service providers and the service providers will tell them, I do not have your money with me,
“Then they go to banks and the banks will say it was the service providers that provided the platform.
“We want you to use your platform to send messages across to them, through your consumer complaint outreaches educate them, when they come complaining, tell them what they should do.
“By all means by any means, make sure your consumers are informed and educated, in that way they will be empowered to protect themselves from falling victims of this menace,” she said. 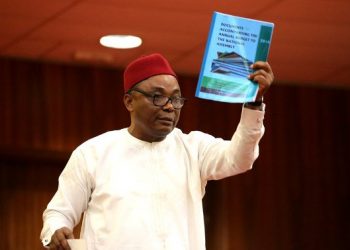