APC youth stakeholders protest over fear of imposition of member 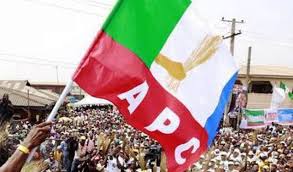 A group known as All Progressives Congress (APC) Youth Stakeholders, on Friday, besieged the National Secretariat of the party in Abuja, as they protested against the imposition of any aspirant.

  
The party had fixed March 26 as date for its national convention.

The protest at the secretariat followed the report in the media that President Muhammadu Buhari has a preference for Senator Abdullahi Adamu to become the national chairman of the ruling party.

The co-convener of the protesting group, Yunusa Yusuf while addressing journalists said the President, being a democrat, would not impose anyone on the party.

He said: “We are saying that the party should not impose any candidate on the people. Party members and the delegates should be allowed to choose who will lead them at the national level.

Yusuf noted that the mistakes that were made in the past must be corrected by the March 26 convention.

The stakeholders insisted that as far as they are concerned, the President has not endorsed anybody until he comes out to say that.

They said they believe the President would allow the party members to express themselves because that was the process that brought him as President.

Let the priests lead in the supplication - By Stephen Ojapah