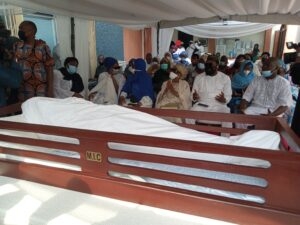 Several Islamic clerics on Friday took turns to offer prayers to God for the eternal repose of the late first Civilian Governor of Lagos State, Alhaji Lateef Jakande who died peacefully on Thursday in his home.

TheNewsGuru.com, TNG reports that the burial which is slated for evening at Volts and Gardens cemetery, was preceded by a pre-burial Islamic prayers at his residence on number 2 Bishop St., Ilupeju, Lagos State.

The League of Imams and Alfas from Mosques and several personalities attended the Pre-burial prayer for the late ex-governor.

Chief Imam Ahmed Olawale, popularly known as Sheu of Prayer Warriors, in his sermon and prayer said that Jakande lived his life for the masses.

Olawale, who represented the Association of Chief Imams and Alfas in Odiolowo/Ojuwoye, Mushin said: “My message is that whatever you do today, there is going to be reward and recompense whether good or bad.

“If you do good or bad today, definitely it will be rewarded tomorrow. So, for Baba Jakande, he lived a life worthy of emulation.

“He did a lot that the generations yet unborn will never forget. We have seen the traces of incorruptible life and best legacies from him.

“We have lost one that is like a million to us. May Almighty Allah be pleased with him and reward him with Aljanal Firdau,” he said.

Also in his prayers, Alhaji Sheilk Mustaphar Al-Mubarak from Surulere Central Mosque, said that the good Jakande did made his life long.

“If not for him many wouldn’t have been educated. He was a righteous politician,” the Imam said.

He prayed for the family, friends and all politicians doing the right things like Jakande did.

Other Imams and Alfas came at different times to offer prayers for the late ex-governor of Lagos.

Speaking to newsmen, Mr Deji Jakande, one of the children of the deceased, said that their father lived his life for the good of others selflessly.

“We still don’t believe he is gone, it is as if he is still sleeping. All the guidance he has given to us will remain with us.

“I will miss him for being our father. If I have a million opportunities to come back to the world, I will still choose him to be my father. He was a wonderful and contented father.”

He said that the family would sorely miss Pa Jakande.

Jakande, a former journalist, was Lagos State Governor from 1979 to 1983, and later served as Minister of Works under the military government of Gen. Sani Abacha.

His administration as Lagos State governor left a legacy of massive infrastructure development during his four-year stint, especially through numerous Jakande estates built across the state as well as his sterling investment in education.

COVID-19: You have kept entertainment industry indoors for a year-Comedian Acapella slams Sanwoolu[VIDEO]