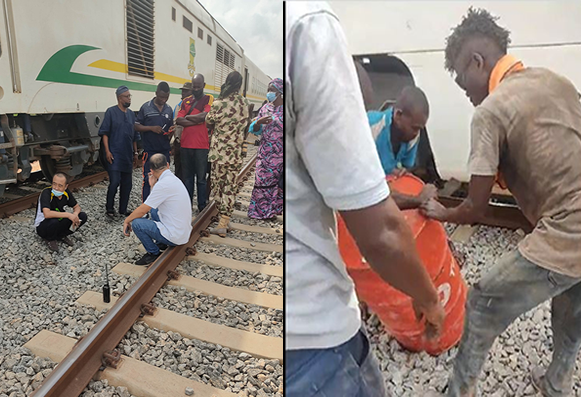 The House of Representatives on Tuesday resolved to conduct an investigative hearing into why the Ibadan-Lagos railway breakdown that left so many Nigerians stranded.

To this end, the House in session mandated its committee on Transport to do a status inquiry of Nigeria Railway corporation and its inadequacies and report back to the house within 4 (four) weeks.

This was sequel too a motion of urgent public importance entitled: “Need to investigate the Ibadan- Lagos train fuel saga” raised at plenary by the House minority leader, Ndudi Elumelu (PDP, Delta).

Raising the motion, Elumelu cited that in recent times , there have been series of media reports of how passenger trains breakdown in the middle of nowhere for lack of maintenance thereby subjecting commuters to possible attacks by hoodlums and armed robbers who can brutalise, maim and cart away hard earned monies and goods of innocent Nigerians.

The Minority leader of the House further pointed that another sad episode happened on Thursday the 11th day of march 2022 , where a train conveying passengers and goods from lagos to Ibadan came to a halt midway due to insufficient fuel , once again endangering the lives of innocent Nigerian travellers on the trip.

According to him, this episode exposes the carelessness, irresponsibility and incompetence of the management of the Nigeria railway corporation to effectively and efficiently manage the sector.

The lawmaker while being disturbed explained that “for a train to leave the station with insufficient fuel only to get stuck midway into the journey with traumatised and stranded passengers, is a huge national embarrassment which not only makes our nation a laughing stock in the eyes of the international community but a complete system failure”.

“The excuse by Fidelis Okhiria the Managing Director of NRC is not just laughable but points to the inability of the management to effectively conduct routine standard operational checks thereby raising serious issues about the safety and reliability of our rail services which must be seriously investigated”, he said.

He expressed worry that if these irresponsible and careless act by the NRC is not effectively tackled and nipped at the bud, it may one day lead to a major disaster where innocent Nigerians will end up losing their lives, hence the need for this motion.

To this end, the House adopted the motion when the Speaker, Femi Gbajabiamila called for voice vote after debates from members who mostly supported the motion.

The Nigeria railway corporation under the supervision of the ministry of transport came into existence 112yrs ago for the purposes of easy and cheap movement of bulk goods and commuters from hinterlands to seaports and vice versa and its first rail business activities was commenced with the construction of the Lagos / Ibadan rail line.