Iranians are celebrating author Salman Rushdie’s stabbing attack as he was about to give a lecture in the US. The 75-year-old 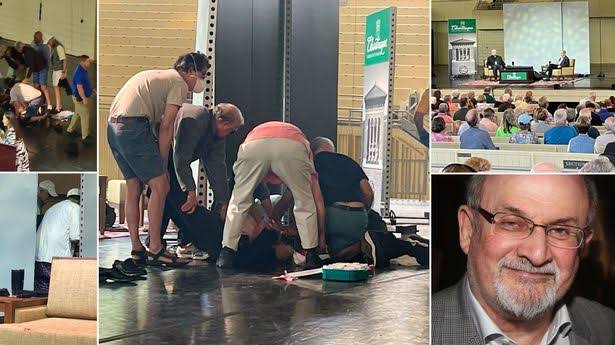 Iranians are celebrating author Salman Rushdie’s stabbing attack as he was about to give a lecture in the US.

The 75-year-old sustained nerve damage to his arm and damage to his liver and may lose his eye after the stage was stormed and he was stabbed repeatedly.

New York state police have named 24 years old Hadi Matar as the suspected attacker as of Fairview, New Jersey, who was taken into custody following the incident.

Why I don’t touch gloves before UFC fights – Israel Adesanya

Sir Salman, whose The Satanic Verses novel led to death threats from Iran in the 1980s, was about to deliver a lecture at the Chautauqua Institution, in Chautauqua some 65 miles south-west of Buffalo, when the incident occurred.

Last night Iranian state media celebrated the attack on Rushdie by calling him a “depraved heretic-writer” – accusing him of blasphemous writings against Islam and prophet Muhammed.

The Asr Iran news site carried an often-cited quote by Iranian Supreme Leader Ayatollah Ali Khamenei that said the “arrow” shot by the late Ayatollah Ruhollah Khomeini, who issued the fatwa, “will one day hit the target”.

The Khorasan daily carried the headline: “Satan on the way to hell.”

Mouthpiece for the Iranian regime, FARS News, branded Sir Salman an “apostate” and accused him of having “insulted the Prophet of Islam” with the book’s “anti-religious content”.

The Kayhan newspaper, whose editor-in-chief is appointed by Iran’s Supreme Leader Ali Khamenei, wrote: “A thousand bravos to the brave and dutiful person who attacked the apostate and evil Salman Rushdie in New York.