by Ediri Oyibo
in News, World
Reading Time: 1 min read
A A
0 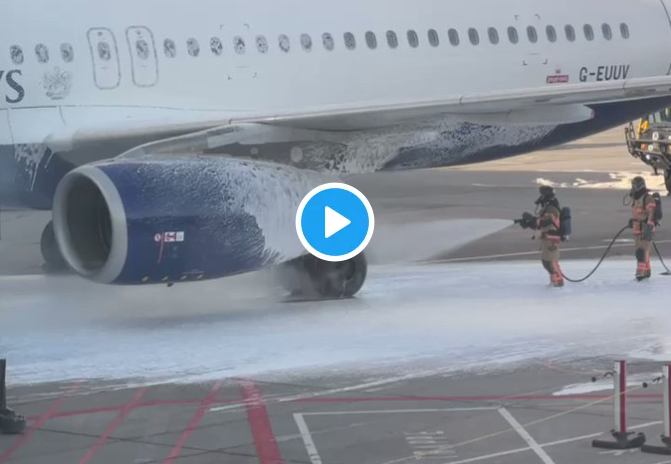 A plane belonging to British Airways on Wednesday caught fire at the Copenhagen Airport in Denmark.

It was reported that the plane was coming from London.

A video of the incident showed firefighters hosing down the plane as passengers watched from a waiting room.

Plateau: PDP directs flags to fly at half-mast in honour of 16 members

All passengers and crew got off the Airbus A320-232 without injury, police said on Twitter.

The Danish Police tweeted: “A fire erupted in an engine of a passenger jet that was stopped at the gate. Fire is out. Passengers evacuated. No one injured”.

sooo, it looks like our flight from Copenhagen to London on @British_Airways might be a bit delayed… @flightradar24 pic.twitter.com/kr6dffV5uz

Meanwhile, British Airways has downplayed the incident, according to MailOnline.

The airline said smoke was spotted coming from the plane due to ‘hot brakes’ at around 8 pm as the plane was at the gate.

“All customers and crew disembarked the BA820 safely. We would never operate an aircraft unless it was safe to do so,” a statement by British Airways reads.