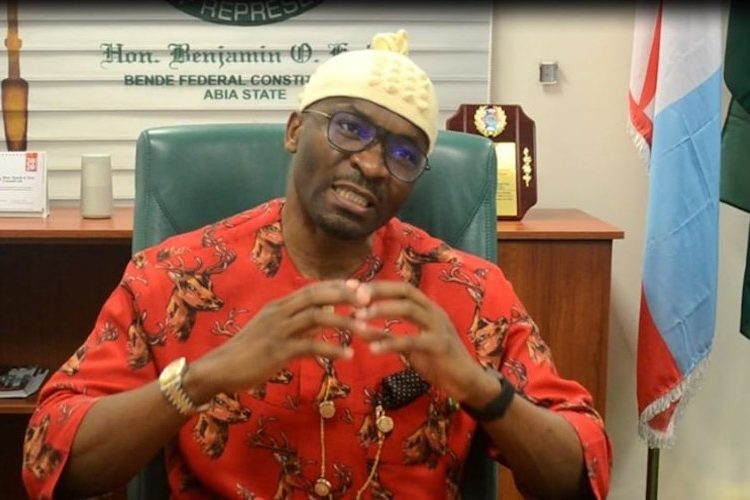 The Spokesman of the House of Representatives, Hon. Benjamin Okezie Kalu, has distanced the House from the assertion that Nigerians should take personal measures aimed at defending themselves against terrorists by taking up arms.

Majority Leader, Alhassan Ado Doguwa (APC, Kano), during a debate on a motion on matters of urgent public importance by Hon. Shehu Balarabe, (APC, Kaduna) on the recent successive terrorist attacks in Kaduna State, advised that Nigerians be allowed to bear arms in self defense.

The majority leader who represents the interests of the ruling party on the floor of the House said the unabated killings under the government of his party has left him “speechless.”

He said: “Mr. Speaker, I rise to speak in the capacity of the Majority Leader who of course is the Ambassador of government on this floor. You can see how this Chamber is thrown into disquiet, how this motion is thrown into emotionally disturbed manner; so emotional by the statements of the mover of the motion.

“When you have a government in place, the major responsibility of that government, especially a democratic one which was elected by the people is to ensure safety of lives and property of the innocent citizens. Mr Speaker when things like this continue on daily basis those of us who are representatives of the government we become speechless.

“Why should this thing continue to happen? I think government and officials of government, not even the security agencies, security agencies are under democratic authorities. Government in this case has to rise up to its responsibility. Call a spade, a spade. If it is about funding, each of us here knows we have never have(sic) any cause to contemplate funding our security agencies,” he said.

He therefore urged that the citizenry be allowed to resort to self-help by taking up arms so as to defend themselves.

“With all sense of responsibility, I think Nigerians should this moment should be allowed to also take arms; Nigerians must be allowed to take up arms in defence of their innocent souls, defend their hard earned properties because it is like a monumental failure, if the agencies of security have failed, then Nigerians should not be seen as failure. Let Nigerians organise themselves in the way of civil defence. Let organise defence for their innocent souls,” Doguwa stressed.

Thereafter at a media briefing the House Spokesman, Kalu said Doguwa’s call was his personal opinion and does not represent the official position of the Parliament.

According to him, until such a time when the laws guiding the use of fire arms are amended by the Legislature and assented to by the President, access to and use of fire arms by unauthorized persons remain illegal.

He added that the House leader’s comments was his personal views as a representative of his people, not a collective resolution of the House.

The House had via the motion also urged the Federal Government to direct the Inspector General of Police and the Chief of Army Staff to deploy special forces to Birnin Gwari and Giwa Federal Constituency of Kaduna State to combat the bandits terrorising the people.

The House also urged the Federal Government to set up camps for internally displaced persons and should also provide relief materials to offer succour for the victims of the attack.