Nigeria imports N837bn steel despite spending over $8bn on Ajaokuta

by Yabagi Danladi
in News
Reading Time: 4 mins read
A A
0 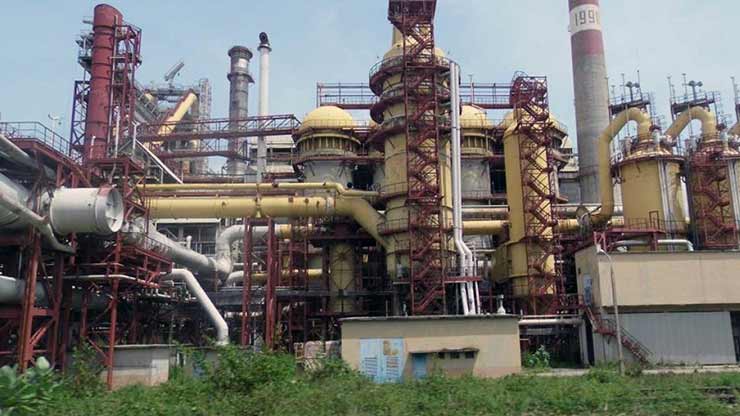 Nigeria has imported steel worth over N837 billion despite having spent over $8 billion on Ajaokuta Steel Company Limited.

Steelmakers are therefore sceptical about the planned concession of Ajaokuta Steel Company Limited after Nigeria imported iron, steel, and metals valued at N837.761bn in the third and the fourth quarters of 2021.
According to the National Bureau of Statistics, the country brought in basic metals, iron, and steel products with 6000mm in width, rolled, painted, varnished, and coated with plastics within the six-month period.
The total value of basic metal products imported within the two quarters was N748.529bn, while that of iron and steel was N88.232bn.

ALSO READ:Ajaokuta: Nig needs between $650m to $1bn to complete phase 1- Minister
This is happening after the Manufacturers Association of Nigeria estimated that the country had spent over $8bn on the idle steel plant so far.
Key players in the steel sector are worried about the level of steel imports into the country as well as the lack of functionality of Ajaokuta Steel Company and the Aluminium Smelter Company, located in Akwa Ibom State. The smelter company is supposed to produce ingots for the production of roofing sheets in the country, but it is mired in a legal quagmire.
A former Chairman of the Manufacturers Association of Nigeria Steel Group and Chief Executive Officer of Qualitec Industries, Engineer Oluyinka Kufile, said, “They should tell us who imported the steel products because some people claim that they are producing but are simply importing.”
He noted that there was a possibility that the importers did not pay import duties or paid so little to jeopadise the local steel sector.
He lambasted the Federal Government for keeping Ajaokuta Steel for a long time without handing it over to competent managers, expressing doubts over the planned concession of the steel pmanage

ALSO READ: Unions compel Buhari to sign Ajaokuta Steel Company Completion Fund Bill
“Is there anything working in Ajaokuta? Is anyone benefitting from it since it was commissioned? Have they not done any concession before, which did not work? What makes anyone think it will work this time?”
On the Aluminium Smelter Plant, Kufile noted that Nigeria had not demonstrated enough will power to resolve the lingering issue.
“If your father created so many problems and you cannot resolve them, then you are not ready to move on,” he further said.
There has been a tussle between the Bureau of Public Enterprises and a Nigerian-American company known as Bancorp Financial Investment Group Divino Corporation.
In 2012, the Supreme Court had ruled that BFIG was the preferred bidder for the smelter plant, but the BPE is yet to hand over the plant to the company.
BFIG President, Reuben Jaja, claims that the BPE is frustrating the company’s attempts to take over ALSCON.
However, BPE Head of Public Communications Amina Tukur Uthman, in a statement sent to the correspondent recently, noted that the company defaulted in paying the initial 10 per cent of the bid price of $410m within 15 working days as stipulated in the Request for Proposal issued to bidders.
She said that BFIG also failed to provide the strategic business plan and the Annexure, which was the technical agreement with Daewoo.
“The transaction was frustrated by BFIG’s non-compliance with the terms of the judgment, mainly, being the bid price and the re-negotiation of the SPA,” she said.
On Ajaokuta Steel, Export Manager of the Lagos-based Aarti Steel, Okhai Ehimigbai, said that rather than concession Ajaokuta Steel, the government should privatise it completely.
The Federal Government recently engaged CPCS Transform Consortium for N853 million for consultancy services of Ajaokuta Steel Company, including the National Iron Ore Mining Complex in Itakpe.
But Ehimigbai said, “We have had this kind of arrangement in the past that did not work. Why not privatise it?”
He said that the inactivity in Ajaokuta Steel had crippled the steel sector in Nigeria.
“If Ajaokuta is working, we will not be importing hot-rolled steel for production today,” he said.
He warned that the plant should not be handed over to a company from countries where iron and steel products were being imported.
He said, “ If you hand it over the such a company, it will not like Ajaokuta to work, otherwise the country will lose business.”
Nigeria spent N20.4bn on Ajaokuta Steel Company Limited from 2016 to 2021 despite its idleness.
Economists, experts suggest unbundling the plant.
Economists and experts have expressed shock at the level of mismanagement going on at Ajaokuta, suggesting an unbundling of the plant before the concession.
The Chief Executive Officer of Centre for the Promotion of Private Enterprise, Dr Muda Yusuf, said bureaucracy, political interference and corruption were key issues affecting the success of the plant.
Yusuf said, “I worked there for a few years. They have a massive housing project, a machine shop where machines are fabricated, and a section producing construction materials.
“There is a need to unbundle Ajaokuta Steel before concession because it is a massive project. Then get the private sector involved, that is, a company with the technical and financial capabilities to manage it. You can decide to concession the power plant, then the machine shop and other segments differently,” he said.
A professor of Ceramics Engineering, Patrick Oaikhinan, said, “Once the government is taking a big share in any corporation, the leadership is not always straightforward. Who were the experts that have managed Ajaokuta and why wouldn’t Nigeria be importing steel when competent experts are not allowed to manage it?”
An economist and accountant, who is also the Chairman of Manufacturers Association of Nigeria Export Group, Ede Dafinone, called for 100 per cent privatisation of the plant, rather than the proposed concession.
“Government can have a golden share, but the management should be free to make decisions on capacity and production issues,” Dafinone said.
He noted that the failure of Ajaokuta to produce flat sheets, which were strategic in Nigeria’s industrialisation drive, was affecting the Nigerian manufacturing sector negatively.
A retired General Manager at Ajaokuta Steel, Mr Kunle Aiyedun, said successive governments after late Shehu Shagari lacked the will power to resuscitate the steel plant.