Nigerian entrepreneur and businessman, Obi Iyiegbu, commonly known as Obi Cubana, has said revealed one of his best decisions in life.

According to him, one of his best decisions in life was to marry his wife, Ebele.

“Women are a reflection of how you treat them” – Obi Cubana’s wife, Ebele

Obi Cubana stated this on Tuesday while announcing their 14th traditional wedding anniversary.

He took to social media to celebrate with a beautiful video of his wife. 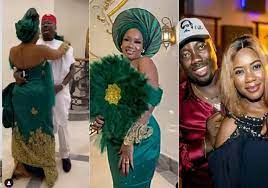 Obi Cubana, who recently joined his voice to that of millions of other Nigerians to cry out over the recent killing of Catholic Church worshippers in Ondo State, said he made one of the best decisions of his life 14 years ago by marrying his wife, Ebere Iyiegbu who he described as the sweetest thing that can never cause him diabetes.

He wrote: “The Traditional wine carrying of this beautiful model-queen took place exactly 14yrs ago this day, in Obosi, Idemmili North LGA of Anambra State!!

“This is one of my life’s BEST decisions; getting married to this damsel!! 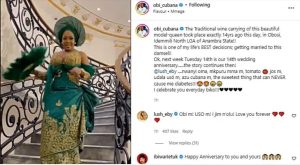 TheNewsGuru.com (TNG) recalls that Obi Cubana had revealed that he met his wife when he was living in a one-room apartment in Abuja.

He made this statement during an Instagram live interview.

Obi Cubana said:“I met my wife when I was living in a one room apartment in Abuja. I married her when we were living in a three-bedroom flat in Garki, Abuja. Peace brings about prosperity. I must keep celebrating her, this is a promise I have made to myself. We had our two children in the three-bedroom flat.

“Some people are rich but they don’t have happiness. The most important thing is for one person to provide for the family. My wife accords me all the respect in the world. She practically worships me. She has held our family together. I don’t know what I would be without her.” 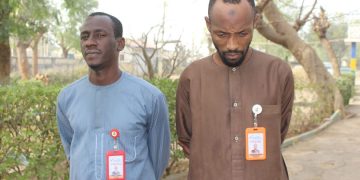