An angry mob on Saturday stormed a police station in Sagamu, Ogun State, after a police officer reportedly caused the death of Tiyamu Kazeem, a footballer.

Videos and pictures of how the mob vented their anger on the officers and destroyed some properties of the police have been trending online.

In a statement by Oladimeji Oshode, the media officer of Remo Stars Football club, where Mr Kazeem played in the right-back position until his death, the club mourned the death of Mr Kazeem.

Happening Now: Chaos as #SARS officials kill footballer in #Sagamu . . #Sagamu is presently on fire in #OgunState, as a young footballer, identified as Tiamiyu Kazeem alias #Kaka, was allegedly chased to his death by some SARS operatives. . . It was gathered that Kaka was on his way to Sagamu from #Abeokuta after his training, when he ran into SARS operatives who labeled him a yahoo boy and started chasing him. . . Eyewitnesses claimed that the officers shot at his car tyre which made it somersault. On seeing what had happened, the officials ran away, leaving Kaka to his fate. . . The footballer was later rushed to Fakoya Hospital, Sagamu, where he was pronounced dead. Residents have now taken to the streets to protest the murder of the youngster who once played for the #Remo Football club.

“The incident occurred this afternoon (Saturday) in Sagamu while he was driving along Sagamu area of Ogun State with one of his teammates, Sanni Abubakar,” the club management narrated.

It cited a witness account as saying that a SARS officer stopped the footballer and accused him of being a Yahoo Boy(internet fraudster) and they insisted on taking him to the nearby police station.

“The SARS officer stopped Tiyamiyu Kazeem, insisting that he was a Yahoo Boy. He brought out his identity (ID) card to identify himself as a player of Remo Stars FC, but, the officer insisted on taking him to the nearest police station in Sagamu.

“Tiyamiyu and Sanni obliged, followed the SARS officers, only for them to notice that they were driving towards Sagamu-Abeokuta Expressway. Then the guys questioned to know where the SARS officers were taking them to, but this prompted them to stop the car and push him (Tiyamiyu) out of the car, and a vehicle knocked him down,” the unnamed witness was quoted as saying.

It was gathered that Mr Kazeem was immediately rushed to Fakoya Hospital in Sagamu, where it was confirmed that he was dead.

Meanwhile, the police have denied the involvement of any SARS or police officer in the death of Mr Kazeem.

The Ogun state police spokesperson, Abimbola Oyeyemi, told newsmen that the deceased was arrested by officers of the Zonal Intervention Squad of the police force.

According to Mr Oyeyemi, the youngster was arrested for wearing a military outfit when he was not a soldier.

“The police officer challenged him and he was arrested. While they were on their way, the vehicle developed a fault and while he was crossing the road, he was knocked down by another vehicle,” he told this paper on Saturday evening. 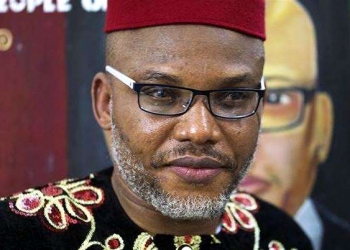