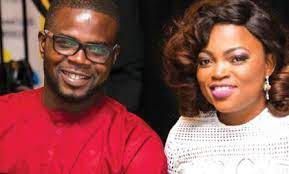 There have been speculations that the marriage of Funke and her producer husband, JJC Skillz, is on the brink of collapse, and the couple’s recent action seems to confirm the rumour.

The power couple attended the African Magic Viewers Choice Awards (AMVCA) gala night on May 13. Although they were seen together but the usual romantic bliss seen by fans of the duo was lacking.

TheNewsGuru.com (TNG) reports that Funke and JJC seemed full of life as they interacted and paid pleasantries to their colleagues at the event.

The celebrity couple, who got married in 2016 and welcomed a set of twins in 2018, have neither confirmed nor denied the reports.

Speculations have been making rounds that the celebrity couple whose union have been blessed with twins were having troubles in their marriage.

The claims on Funke Akindele’s marriage gained more attention after Benito, Akindele’s stepson, while reacting to a TikTok post, disclosed that the time he spent with her was horrible.

He said, “She’s not what you all think she is, I lived with her for two years, it was horror.”

He confirmed his love for his wife, saying he misses home and enjoined her not to allow anyone to spoil her vibes adding that the “Devil is a liar”.

He wrote “The only rock I know that stays steady and the only institution I know that works is the family. London is cool but I’m missing home @funkejenifaakindele, my love.”

“Have loads of fun with the children. See you soon at home. Don’t let anyone spoil your vibes. #familyfirst. #Bellos4ever #chinesswhispers #devilisaliar.”

Akindele also reacted to his post saying: “Darling, thank you. We miss you too.”

The couple got married in 2016 and their marriage produced twins in 2018.

Tears as Deborah Samuel’s remains is buried in Niger state

Tears as Deborah Samuel’s remains is buried in Niger state