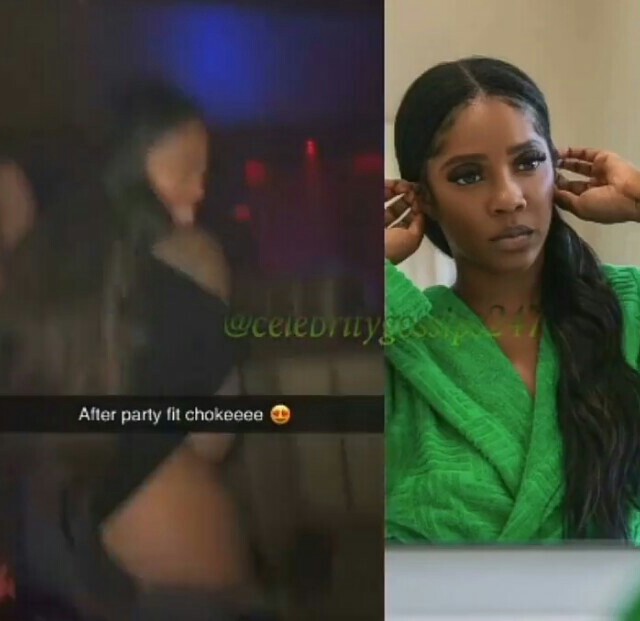 Fans of popular Nigerian Afrobeat artist, Tiwa Savage, have wildly dragged and criticized her for completely exposing part of her behind while rocking and dancing at a party.

This comes few days after the mother of one revealed her song “Somebody’s son” was about Jesus, not a relationship.

In a viral video on social media, Tiwa savage can be seen putting own a black dress which barely covers her behind as she danced and partied with her friends.

The video has stirred lots of controversial arguments online as fans are dragging her for the irresponsible act.

TheNewsGuru.com recalls that recently the Nigerian singer received an honorary doctorate degree, Doctor in Music, from the University of Kent in the United Kingdom.

What you need to know about Tiwa Savage

Tiwa Savage was born in Isale Eko and relocated to London at the age of 11 for her secondary education.

After participating in the UK edition of The X Factor and graduating from Berklee College of Music, Savage signed a publishing deal with Sony/ATV Music Publishing in 2009.

Inspired by the growth of the Nigerian music industry, Savage moved back to Nigeria and signed with Mavin Records in 2012.

TheNewsGuru.com reports that she made an appearance on the label’s 2012 compilation album Solar Plexus.

Her debut studio album Once Upon a Time was released on the 3rd of July 2013.

The album was nominated for Best Album of the Year at the 2014 Nigeria Entertainment Awards and for Best R&B/Pop Album at The Headies 2014.

In June 2016, she signed a management and publishing deal with Roc Nation.

In September 2017, the afrobeat singer released her debut EP Sugarcane. R.E.D and Sugarcane have both been nominated for Best Album at the Nigeria Entertainment Awards.

In May 2019, she announced her record deal with Universal Music Group and exit from Mavin Records.[6] Savage sings in English and Yoruba; her music is a blend of Afrobeats, R&B, pop and hip-hop.

Savage’s contributions to the Nigerian music industry have earned her several achievements.

She has been involved in youth empowerment and breast cancer screening projects and has raised funds to build schools in Nigeria.

[Devotional] IN HIS PRESENCE: The arm of flesh will fail