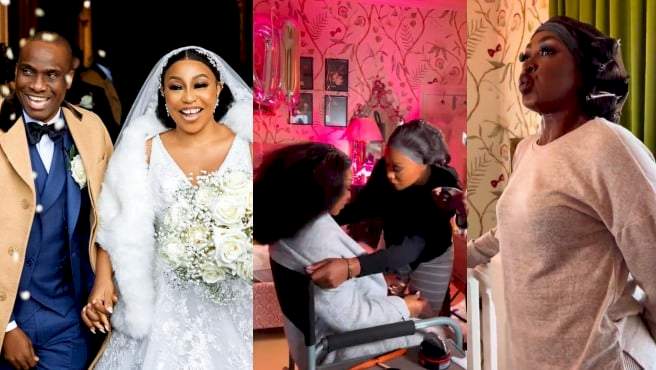 It is no longer news that famous actress, Rita Dominic, and her husband, Fidelis Anosike, tied the knot in London on 26 November 2022 but the internet is still yet to get over their grand wedding following a video that surfaced as a veteran actress, Kate Henshaw, wept with her friend.

In the teary-eyed video, Kate was seen struggling to hold back her tears as she watched her friend (Rita) cry while getting ready for her wedding.

TheNewsGuru.com (TNG) reports that Rita broke into tears while getting glammed up for her wedding.

Her Chief Bridesmaids, Michelle Dede, who was right beside her, comforted her.

It would be recalled that Rita tied the knot with the love of her life (Fidelis), in a grand style in North Yorkshire, England..

The duo tied the knot in London on 26 November.

In fact, in April and November, Rita was on the lips of Nollywood stars as she finally tied the knot at age 47.

Rita, shut down the internet with her two-part fairytale wedding, a traditional and White wedding.

Other Nollywood celebrities present at the wedding ceremony were Chioma Akpotha, Blessing Egbe and Mildred Okwo.

TheNewsGuru.com (TNG) had earlier reported that Rita had her traditional wedding to Anosike, who is the Chief Executive Officer of Folio Group, at her family house in Aboh, Mbaise, Imo State.

Recall that earlier, in December 2021, Rita, one of the most eligible spinsters in the movie industry, had revealed on social media that she was in a relationship with Anosike.

Videos posted on social media revealing her wedding ceremony showed Rita full of smiles, as she got ready for her big day.

She wore an exquisite flowing lace gown, while her groom was dressed in a blue suit.

The mansion, whose vintage design and ambiance reeked of luxury, was another highlight of the event. As the bridesmaids made their way into the hall, a pianist played the popular Fur Elise tune to usher them in slowly.

Watch the moment Rita and Kate broke down in tears