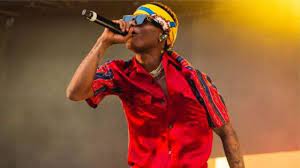 Nigerian singer and songwriter. Ayodeji Balogun, aka Wizkid, has been confirmed as the artist that will be performing on a popular American TV show for the first time.

Following the success of the release of ‘More Love Less Ego’ and a historic night at the Madison Square Garden in New York, superstar and multiple award-winning singer would be taking on a new challenge as it was confirmed that he would be performing on a popular American Night Show for the first time.

Wizkid was confirmed as a performer that would feature on the Tonight Show With Jimmy Fallon a popular US TV Show. The singer will be performing on the popular TV show in the late hours of the night today, Friday, November 18, 2022.

This was confirmed by Big Wiz himself in a post on social media.

TheNewsGuru.com (TNG) reports that Wizkid is a prominent figure in the modern-day Afrobeats music scene. He is regarded as one of the biggest and most influential African artists of all time.

He began recording music at the age of 11 and released a collaborative album with the Glorious Five, a group he and a couple of his church friends formed.

In 2009, Wizkid signed a record deal with Banky W’s Empire Mates Entertainment (E.M.E). He later rose to the limelight after releasing “Holla at Your Boy”, the lead single from his debut studio album, Superstar (2011), which also spawned the singles “Tease Me/Bad Guys” and “Don’t Dull”.

In September 2014, he released the self-titled second studio album, Ayo. The album was supported by six singles, including the song “Jaiye Jaiye”. Wizkid left E.M.E after his contract expired.

In 2016, Wizkid achieved international recognition following his collaboration with Drake on the hit single “One Dance”, which reached number one on the US Billboard Hot 100 and topped the charts in 14 additional countries.

The song broke multiple records, making Wizkid the first Afrobeats artist to appear in the Guinness World Records. In March 2017, he signed a multi-album deal with RCA Records; and released his third studio album Sounds from the Other Side, later that year. The album was supported by five singles, including “Come Closer” featuring Drake.

In 2018, he was featured on the song “Checklist” by Normani and Calvin Harris, which reached number one on the Billboard World Digital Song Sales chart. The following year, he was featured on Beyoncé’s project The Lion King: The Gift on the single “Brown Skin Girl”, which also reached number-one on the World Digital Song Sales chart, and won him a Grammy Award for Best Music Video.

In October 2020, he released his fourth album, Made in Lagos, which received commercial success and acclaim, reaching number one on the Billboard World Album Chart.

The album includes the single “Essence” featuring Tems, which became the first Nigerian song to chart on the Billboard Hot 100 and reached the top ten following a remix released by Justin Bieber. Wizkid’s fifth album More Love, Less Ego was released on 11 November 2022.

By February 2021, Wizkid was the most-streamed Nigerian artist of all time on Spotify, with over 3.4 billion streams across all credits.