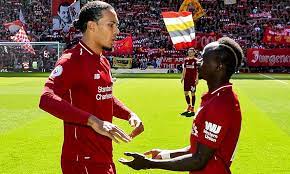 Netherlands and Liverpool defender, Virgil van Dijk has forwarded a message to former teamate Sadio Mane following his injury that ruled him out of the Qatar 2022 World Cup.

Dijk opined that the world will miss Mane at the World Cup, saying he’s one of the finest defender in the world.

VVD said that Mane is one of the best players in the world, and the World Cup will miss a player of his quality.

He added that  he so  feels terrible for Mane, adding that he is disappointed he cannot play against his friend at the World Cup.

Netherlands will face Senegal in a Group A tie on Monday and Mane will not feature due to an injury.

“I feel terrible for him [Sadio Mane] to miss the World Cup. The tournament deserves the best players in the world, and he’s definitely one of them,” Van Dijk told ESPN.

“He’s also a very good friend of mine, so I’m really disappointed that I cannot play against him.”

He added, “Senegal have enough players who can replace him, but they’re not like him. Mane is in a different category.”

Netherlands are drawn in group A alongside Senegal, Ecuador and host Qatar.