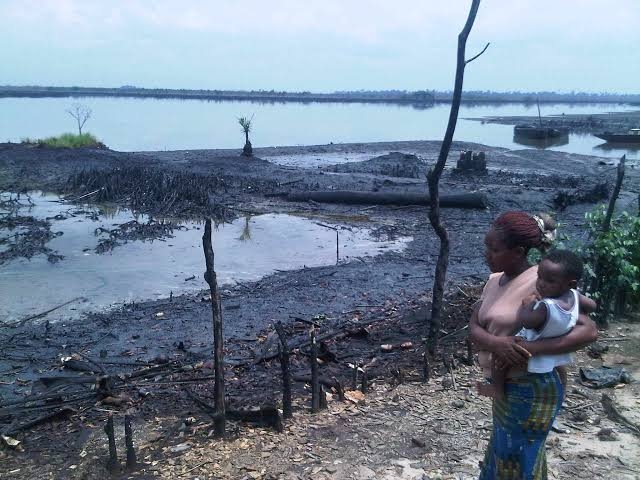 Woman with her child at the bank of a badly polluted river in the Niger Delta, depicting much of the reality in the region. | Photo Credit: Telegraph.co.uk.

Artisanal Fishermen Association of Nigeria (ARFAN), on Sunday applauded Friday’s ruling by a Dutch Court that found Shell liable of polluting the farmlands of four farmers in the Niger Delta region.

They urged the oil firm which lost the case at the appeal court to consider complying with the judgement and compensate the farmers, and remediate the polluted environment as ordered by the Durch Appeal Court.

“The triumph of the farmers in the Dutch court is heartwarming”. – Rev. Samuel Ayadi, Coordinator of ARFAN.

Recall that a Dutch court on Friday ordered the Nigerian subsidiary of Shell, to pay a compensation over the 2008 oil spills in Oruma, Bayelsa, Goi in Rivers and Ikot Ada Udo, in Akwa Ibom.

Also recall that four farmers had dragged Shell to a Dutch court over a 2008 oil spillage that adversely affected their farms and their means of livelihood.

The Court of Appeal in The Hague, ruled that the Nigerian arm of the British-Dutch company, SPDC should compensate the farmers and clean-up the pollution from its leaking oil pipelines and install anti-leak devices on them.

Reacting to the judgement in an interview with NAN in Yenagoa, Rev. Samuel Ayadi Coordinator of ARFAN in the Niger Delta noted that the triumph of the farmers in the Dutch court was heartwarming.

He said that the litigation brings to mind the damage and impact of the 2011 Bonga oilfields spill which ironically led to the extinction of the bonga fish specie for which the oil facility was named after.

Ayadi lamented that the refusal of Shell to compensate the affected fishermen for losses incurred after the spill polluted the Atlantic ocean was regrettable.

According to him, the intervention of President Muhamadu Buhari who is an apostle of the rule law to prevail on Shell to abide by court judgements has become necessary to save the agricultural sector from oil pollution.

He noted that the National Oil Spills Detection and Response Agency (NOSDRA), had acted in good faith and imposed fines on Shell, but Shell refused to pay and unsuccessfully challenged the fine in court.

Ayadi appealed to the government to prevail on Shell Nigeria Exploration and Production Company (SNEPCO), to pay the $3.6 billion fine imposed by the oil industry regulators over the 2011 Bonga oilfield spill.

Ayadi noted that the fishermen had suffered untold hardship fishing at the nation’s territorial waters since 2011 when an equipment failure from the Bonga Offshore field operated by SNEPC discharged some 40,000 barrels of crude oil into the waters.

Recall that On December 20, 2011, during loading of crude at Bonga fields within OML 118 situated at 120 kilometres off the Atlantic coastline, the export line ruptured and discharged crude oil into the sea.

The export line, according to a Joint Investigation Report by National Oil Spills Detection and Response Agency (NOSDRA} and SNEPCO spewed about 40,000 barrels (6.4 million litres) of crude oil into the sea.

Ayadi told NAN that the fishermen were hopeful that the federal government’s intervention would revamp their businesses, adding that the compensation would ensure that fishermen thrown out of business would recover.

He noted that the fishermen deserved to be indemnified for the loss of income having complied with a regulatory order by NOSDRA to pull out of fishing to avoid catching contaminated fish.

The fine comprised a $1.8 bn as compensation for the damages done to natural resources and consequential loss of income by the affected shoreline communities as well as a punitive damage of $1.8 bn.

Following a legal action instituted by Shell, at a Federal High Court in Lagos, Trial judge, Justice Mojisola Olatoregun on June 20, 2018 dismissed the suit challenging the imposing of $3.6 bin fine on it by NOSDRA.

The fishermen impacted by the Dec. 20, 2011 spill from the Bonga Oilfields advised Shell to comply with the 2018 court judgement to redeem its image as a law abiding corporate entity.

On the Dutch Court ruling, Shell said it was disappointed by the decision of the appellate court which affirmed the earlier verdict of a lower court in Netherlands in favour of the affected farmers.

Mr Bamidele Odugbesan, Media Relations Manager of the SPDC told NAN that most leaks from its operations were caused by vandals.

”We continue to believe that the spills in Oruma and Goi are the result of sabotage.

”We are therefore disappointed that this court has made a different finding on the cause of these spills and in its findings that SPDC is liable.

”Sabotage, crude oil theft and illegal refining are a major challenge in the Niger Delta.

”Indeed in 2019, about 95 per cent of spill incidents from our operations there, were due to such criminal acts.

”Regardless of causes, we clean up and remediate, as we have done with the spills in this case,”he said.