Buhari reacts to latest killings in Kaduna, resurgence of cultism in Rivers

by Olaotan Falade
in Nigeria, Top Story
0
17
SHARES
428
VIEWS
Share on WhatsAppShare on FacebookShare on TwitterShare on LinkedInShare on TelegramSend as Email

President Muhammadu Buhari has condemned recent violence in Kaduna state, which led to the death of 20 members of Adara community.

A statement by the President’s Senior Special Assistant on Media and Publicity, Malam Garba Shehu, in Abuja on Tuesday, noted that the unfortunate deaths were result of latest incident between the Adara and Fulani peoples in the state.

“The two communities have a long history of mistrust between themselves,” he noted.

Buhari, therefore, appealed for peace and decried on-going culture of ‘an eye for an eye’ that has fuelled a number of attacks and reprisal attacks, with the two communities at different times, suffering casualties in Kajuru and Kachia Local Governments Areas (LGAs) of the state.

El-rufai Orders Reopening of all Tertiary Institutions in Kaduna

He also appealed to residents of the state and other Nigerians to refrain from comments in the traditional and social media, especially by people who have little knowledge of the history of the longstanding conflict.

According to him, such comments can fuel further conflict in the area and between the two groups.

Buhari enjoined traditional and religious leaders to be cautious with their comments on the conflict, insisting that whatever words they share publicly should not be inflammatory but be inspired by an interest in peace.

While condoling with those who lost loved ones in the attacks, the president said: “The entire nation grieves with you. The Nigerian army and police are already in the area to ensure that peace and security are restored.”

In response to reports of the resurgence of cultism leading to loss of lives in Rivers, Buhari condemned the cultist killings and ordered for increased community and law enforcement action against its escalation.

He also called on law enforcement agencies to intensify efforts to end the menace.

The President urged quick and effective intervention by community and civic leaders in support of law enforcement efforts, in all such areas bedeviled by cultist attacks and inter-communal violence.

El-rufai Orders Reopening of all Tertiary Institutions in Kaduna 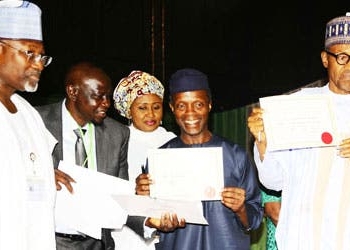