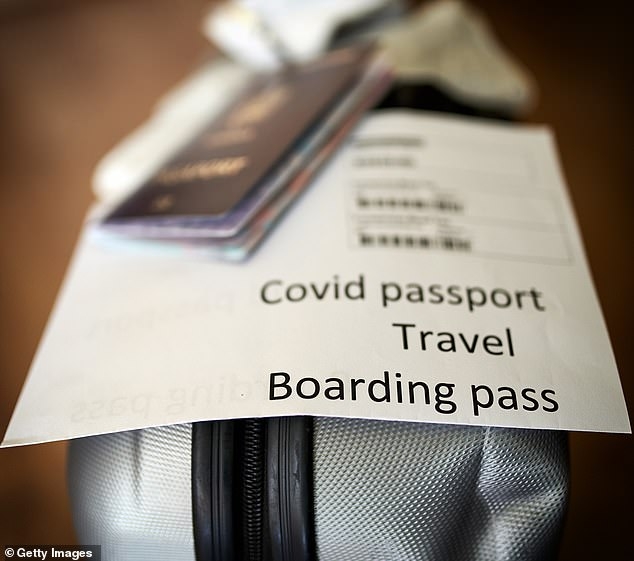 Activities of criminal gangs selling forged Covid-19 certificates at airports for hundreds of pounds to unsuspecting travellers abroad have been uncovered.

TheNewsGuru.com, TNG reports that several countries, including Nigeria and Britain, require proof of a recent negative test from all international arrivals – but gangs are helping people slip through the net for as little as £35 equivalent of 18,145.99 Nigerian Naira.

The European Union Agency for Law Enforcement Cooperation (Europol) on Monday said a man was arrested at Luton Airport on suspicion of selling fake Covid papers for £100 equivalent of 51,856.35 Nigerian Naira.

The news means that people who could be infected with the virus are able to arrive countries unnoticed.

Gangs are faking the name of a genuine laboratory on the false certificates in a bid to dupe border officials, Europol said.

This is most likely to be a polymerase chain reaction (PCR) test, which tend to take 12 to 48 hours for the results to come back.

However passengers could also use a cheaper and quicker lateral flow test – although these have been criticised for being less accurate especially when self-administered and so could fail to meet requirements.

A trial of one lateral flow test used by the Government found that it detected 79 per cent of cases when administered by a trained professional but only 40 per cent if someone is self-swabbing.

This is significantly lower than the more expensive but slower PCR tests which detect 70 to 99 per cent of positive cases. Rapid tests are more accurate for those with high viral loads.

A number of suspects have been caught selling the forged certificates online and through mobile messaging chat groups in Spain and the Netherlands.

Europol added: ‘As long as travel restrictions remain in place due to the pandemic, it is very likely that criminals will seize the opportunity of producing and selling fake Covid-19 test certificates.

‘Given the widespread technological means available in the form of high-quality printers and different software, fraudsters are able to produce high-quality counterfeit, forged or fake documents.’

However, findings by TNG revealed that the fake certificates are majorly sourced abroad. On arriving into the country, the returning travelers are usually turned back by immigration officers at the airport or asked to take a fresh test before they are cleared to come into the country.

TNG notes with concern that these widespread illicit practice at the airports have led to the arrest of several Nigerians abroad. Some are jailed, fined heavily or made to face both sanctions.

Nigerians are being arrested in UK, other places for entering with fake COVID-19 certificates

Sharing his recent experience in the United Kingdom via an Instagram live session, popular Nigerian musician, Daddy Showkey said it is unfortunate that some people have to resort to illicit practice at the expense of other peoples’ lives. He said Nigerian immigration officials would not allow anyone with a fake COVID-19 certificate into the country. He said however, Nigerians face stiffer sanctions abroad for being in possession of such certificates. He therefore warned Nigerians not to fall to the prey of these criminals operating mostly at foreign airports.

As reported by Yen.com.gh, Adu said airline officials originally rejected the COVID-19 test results she submitted in order to travel and asked her to take another test. However, she said, they gave her a printed COVID-19 test result without ever taking another sample from her.

According to Adu, her original results came from the Noguchi Memorial Institute for Medical Research, which is considered a top biomedical research institute in Ghana. However, airline officials would not accept those results but told her she could take another test on the premises so that would not miss a flight for an appointment she had in Lagos, Nigeria.

“When I boarded the flight, a gentleman brought my results and asked that I pay GHS700 equivalent to 6,571.93 Nigerian Naira, which I obliged to pay via mobile money,” Adu told Starr FM. She added, “To date, I haven’t paid the GHC700 I was being asked to pay by the flight officials.”

The name of the airline company was withheld by Ghana’s media.

The printed COVID-19 test results the airline provided Adu came from LEDing laboratory. GhanaWeb reported that when notified of the story, an official from LEDing said, “This matter will be investigated properly and we shall revert with our findings.”

The official also confirmed that LEDing would not have been able to provide test COVID results as rapidly as Adu said she received them. He also confirmed that a stamp appearing on the test results for validation came from a doctor who works for LEDing.