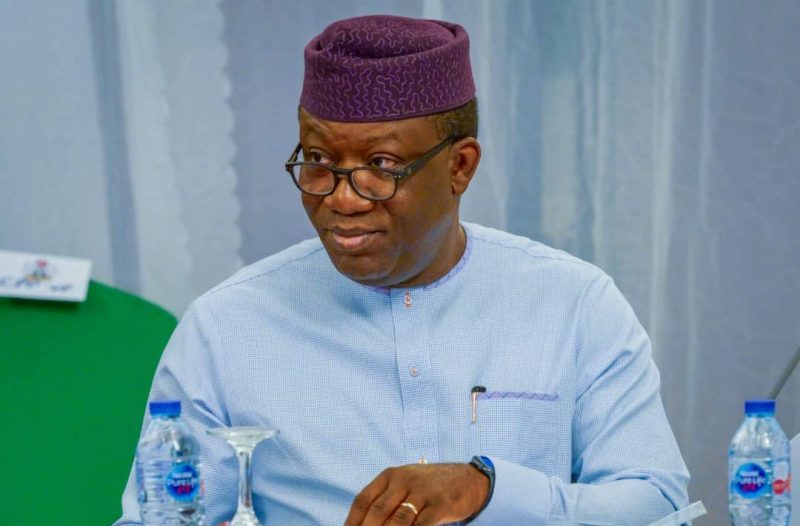 Residents of Ijesa Isu-Ekiti in Ikole Local Government Area of Ekiti on Saturday appealed to Gov. Kayode Fayemi to tighten security in the community.

Residents who spoke with newsmen appealed to security agencies and the state government to arrest kidnappers tormenting the community.

One of the residents, Mrs Ronke Adebayo, appealed to Gov. Fayemi to plug security holes that had been giving kidnappers to have field days in the area.

Adebayo noted that sons and daughters of the community had stayed away from home for fear of being kidnapped.

“It is quite unfortunate that our community that used to be very peaceful has become the den of kidnappers.

“Our sons and daughters outside Ekiti can no longer come home to visit us; instead they prefer to speak to us on phone.

“I appeal to Gov. Fayemi to install good security measures that would secure our lives and rescue us from kidnappers,’’ she said.

Another resident, Mr Sola Oni, said it was time the state government swung into action and eradicate kidnapping in Ekiti.

Oni condemned security agencies for not taking proactive measures to arrest the perpetrators of the evil act.

“The currently security challenges that we are facing in Ijesa Isu-Ekiti are not good, especially when we have active security agencies.

“I advise the governor to give priority to the safety of indigenes because kidnapping has become a business in the state.

“We want the kidnappers to be arrested and prosecuted because they are not bigger than the government or the security agencies,’’ he said.

Mrs Felicia Akanbi, also a resident, condemned the evil acts of unknown gunmen who had been kidnapping people in the community.

Akanbi noted that the town had been known for peace and love without any evidence of unlawful activities for decades.

She appealed to the state government to flush out the perpetrators of kidnapping in the community and make them to face the law.

Yet another resident, Mr Bode Oguntuase, said he moved his family out of Ijesa Isu-Ekiti to a safer town where he could visit them in peace.

Oguntuase noted he was only in Ijesa Isu-Ekiti to move his remaining property to a new house which he hired in another town.

He appealed to Gov. Fayemi to eradicate kidnapping and restore peace to the community.

Between March 21 and March 30, a total of 21 persons were kidnapped along Ijesa Isu-Ekiti to Ikole-Ekiti Road after which huge ransoms were paid for their release.

Youths in the community consequently staged a public protest against the kidnaps.

Boehly: What happens next at Chelsea FC