by Ediri Oyibo
in Nigeria
Reading Time: 5 mins read
A A
0 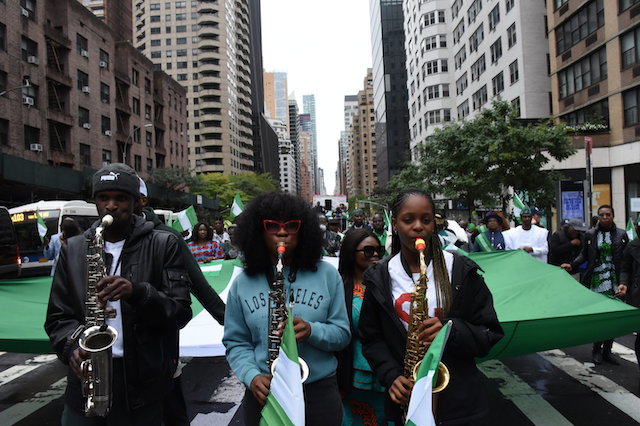 Nigerians from all walks of life on Saturday set New York City aglow and painted the city with green-white-green insignia.

The Nigerian community leaders and envoys joined other compatriots to temporarily close down some parts of the Second Avenue in Midtown.

Also, a young talented 12-year old Saxophonist, Temilayo Abodunrin, was among the instrumentalists leading the parade.

The Parade, which began at the Second Avenue on E. 54th Street and terminated at E. 44th Street at Nigeria House, drew thousands of Nigerians who had the best of time as they sang and danced to Nigerian music.

known as the largest celebration of Nigeria outside the homeland, the annual Nigerian Independence Day Parade, in its 30th year, celebrated the very best, which showcased Nigeria’s unique culture.

The event also promoted the positive image of Nigeria to the rest of the world as several other nationals joined in dancing to the Nigerian music.

The Mayor, while addressing the excited crowd, paid glowing tribute to Nigeria and Nigerians’ unique way of life.

“No one throws a party like Lagos in Nigeria. No one knows how to celebrate life, like Nigeria.

“And right here in New York, your rich culture and contribution to the city is unbelievable,” Mayor Adams said.

The mayor thanked Nigerians for their support when he was running to become the mayor of the City of New York.

President of the Organisation for the Advancement of Nigerians (OAN), Mr Solomon Bakare, congratulated Nigerians on the 62nd independence anniversary.

The Nigerian community leader, lamented the state of the nation after 62 years of independence, saying the dreams of the founding fathers had not been realised.

Bakare challenged Nigerian leaders to improve the lives of the common man and redouble their efforts in building the country as truly the giant of Africa.

The official said the parade and carnival, which started in 1991, was a way to showcase Nigeria to the world and address the negative stereotypes of Nigerians in the American media.

He  said the OAN, which annually organised the parade and carnival, was founded in 1989 by a group of concerned Nigerians to address the needs of the Nigerian community.

At that time, Nigeria and Nigerians were suffering seriously from negative stereotypes in the American media.

Prior to OAN’s formation, there was no organisation committed to the broader issues facing the Nigerian community in the United States.

OAN filled the void by creating an umbrella organisation, which embraced Nigerians from all works of life, regardless of their ethnic and religious backgrounds.

New York City Mayor, Mr Eric Adams, on Saturday evening joined Nigerians from all walks of life to celebrate the 62nd independence anniversary of their homeland.

Adams, in his speech at the Independence Day Carnival, paid glowing tribute to Nigerians for their resilience and unique social and cultural life.

He recalled with nostalgia, his visit to Africa but that his experience in Lagos stood out, declaring that no city throws a party like Lagos.

“No one throws a party like Lagos in Nigeria. No one knows how to celebrate life, like Nigeria.

“And right here in New York, your rich culture and contribution to the city is unbelievable,” Adams stressed.

The mayor thanked Nigerians for their support when he was running to become the mayor of the City of New York.

“I reached out to the youth league of this organisation and others, you were 100 per cent saying we’re going to be with our brother, our fellow African so that he can become the mayor of the city of New York.

“So don’t let anyone deny you of the history. I am very clear. Although I live in America. I am African because I’ll always be African.

Adam also recalled the pain of slave trade and declared that Africans built America to become the greatest country on earth.

“America owes Africa so much. America is what it is because of the people of Africa that were ripped from their soil years ago to come here.

“So, all those years we have been separated, we are here today to say we will be united forever and never ripped apart from each other again,” he said.

The Nigeria’s Ambassador to the United States, Dr Uzoma Emenike, in her remarks, thanked Organisation for the Advancement of Nigerians (OAN) and partners for their tireless efforts organising the event for over 30 years.

“That you’re also sustaining and improving it over the years despite the challenges, is a testament of the Nigerian DNA of resilience and the love Nigerians in diaspora have for their country.

“It is also the desire to maintain the national identity and culture even in a faraway land; the tenacity and generosity of Nigerians in diaspora to recreate the Nigerian culture in their place of temporary residence.”

Emenike noted that Nigeria was the only African country which nationality is celebrated with the temporary closure of a busy strategic road as the Second Avenue in Midtown.

“This is another testament to Nigeria’s high starting global and high regard leading countries across the world to the United States,” she said.

The Nigerian envoy commended Nigerians in the United States for their spirit of excellence saying, “indeed, you all are the real ambassador”.

According to her, Nigerians migrate to the United States and other countries primarily to seek educational and economic opportunities.

“It is well documented that Nigerian immigrants here in the United States excel in their various chosen fields,” she said.

Emenike said estimated three million Nigerians were resident in the United States and pleaded with first generation Nigerian immigrants to ensure that the later generation of Nigerians outside the shores of Nigeria are not lost.

The Minister of Foreign Affairs, Geoffrey Onyeama, represented by the Permanent Representative of Nigeria to the United Nations, Prof. Tijjani Muhammad-Bande, lauded Nigerians in the diaspora for making the country proud.

Onyeama thanked New York City for its generosity to Nigerians and urged Nigerians to continue to enrich the cultural diversity of the City and the United States.

He commended the Organisation for the Advancement of Nigeria (OAN) for their selfless service to the homeland through organising the parade for over three decades and for connecting the youth back to their Nigerian heritage.

The minister also commended the Consul-General of Nigeria in New York, Amb. Lot Egopija for efforts of the Consulate in improving services to Nigerians.

In his remarks, Egopija noted that the Nigeria Independence Day Parade and Carnival has gained widespread acceptance among Nigerians from all walks of life.

“It is worthy of note that what started as a struggle to challenge negative stereotypes about our dear country and compatriots has since gained widespread acceptance and grown to become the largest gathering of Nigerians abroad.

“Consulate wishes to encourage Nigerians in all fields of endeavour to continue to distinguish themselves and be law-abiding.

“While exceling in our communities, let us take pride in educating our chidren and making them appreciate their rich Nigerian heritage.

“Consulate will not relent in efforts to improve services to all stakehoders within our jurisdiction,” Egopija said.