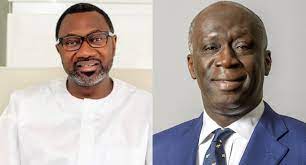 The bank said with 5.36 percent equity holding, Hassan-Odukale is its largest single-holder followed by Femi Otedola with a 5.07 percent stake in the Group.

Recall Tha TheNewsGuru (TNG) had earlier reported how the bank, through its Company Secretary, Seye Kosoko, made a U-turn after disproving reports of Otedola’s emergence as its major shareholder to affirm that he (Otedola) and his nominee owns 5.07 percent equity stake in the bank.

With the development, Otedola has been assumed to have become the single largest shareholder of FBN Holding Plc.

The statement: “We refer to our communication to the market dated October 22, 2021 on the above subject wherein we stated that we would inform the public of any substantial acquisition, upon receipt of notification from the Shareholder.

“This morning, October 23, 2021, FBN Holdings Plc received a notification from APT Securities and Funds Limited, that their Client, Mr. Otedola Olufemi Peter and his nominee, Calvados Global Services Limited have acquired a total of 1,818,551,625 units of shares from the Company’s issued share capital of 35,895,292,791.

“Based on the foregoing, the equity stake of Mr. Otedola Olufemi Peter and his nominee in the Company is now 5.07%.”

However, a new statement from Kosoko indicates that Odukale and Otedola are the only two substantial shareholders, who have more than 5% equity interest in FirstBank Holdings Plc, according to a filing made available to The Nigerian Exchange (NGX).

In a fresh letter addressed to the Director-General of the Nigerian Exchange Limited, FBN Holdings notified the Bourse that Hassan-Odukale holds a cumulative of 5.36 percent of the Group, while Otedola holds a total of 5.07 percent, of the Group’s issued share capital.

This is higher than Otedola’s 5.07 percent stake which he holds through his direct 0.03 stake and 5.04 percent through his indirect stake at Calvados Global Services Limited.

There is no clarity as to the timing of the acquisition of the shares by Odukale and his related entities, especially as the disclosure of FBN Holdings in its financial statements for the period ending June 30, 2021, does not enlist Odukale as a substantial shareholder.

There may have been undue delay in the disclosure, which run ultra vires to relevant statutory and regulatory requirements of disclosing substantial shareholding in a public entity within seven days and 10 days of acquiring such equity interest, according to Sections 119 and 120 of CAMA (2020) and Rule 17.13 of the NGX Rulebook, respectively.

The letter was written by Seye Kosoko, the Company Secretary, was a response to the NGX’s request for clarification on the rationale for arriving at Odukale’s ownership, especially as holdings by entities like Leadway Pensure were added to its “cumulative stake” in the Group, even as Leadway Pensure is a pension fund administrator holding assets, including shares in companies, on behalf of the pension contributors, who are the ultimate beneficial owners of the assets.

In the letter, Kosoko, FBN Holdings defined “substantial shareholders” to mean “shareholders with 5% and above shareholdings”.

Odukale and Otedola may have acquired substantial interests in FBN Holdings, neither of them has controlling interest yet, either from an accounting or statutory perspective.

The struggle may have just started and perhaps an indication of an eventful Annual General Meeting ahead for FBN Holdings.