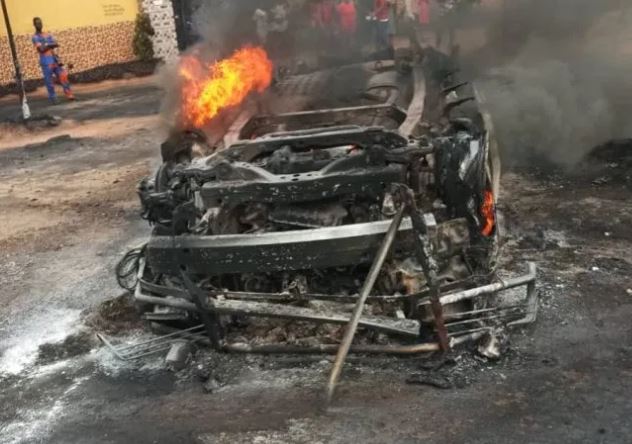 330
SHARES
8.3k
VIEWS
Share on WhatsAppShare on FacebookShare on TwitterShare on LinkedInShare on TelegramSend as Email

No fewer than three persons are feared dead in Apo area of the Federal Capital Territory, Abuja,  on Tuesday morning in what is believed to be a reprisal attack.

According to reports, lifeless bodies of the victims were found on the road early this morning (today).

The killing is coming a day after TheNewsGuru (TNG) reported an attack on Apo, Kabusa area by thugs who invaded the community and attacked #EndSARs protesters, residents and burnt vehicles among other properties.

Many shops, houses, and cars have been razed as a result of the latest escalation of tension. Instructively, security agencies were not on ground to douse the tension.

Also, protesters have barricaded the road in Sokale Bus-stop around Dutse Alhaji, bordering the Kubwa -Zuba Expressway.The protesters are having a faceoff with soldiers, who are shooting to scare them off.

Chizoba, a resident of Waru Village, situated around Apo Mechanic Village disclosed to TNG that the fracas is toeing towards ethnic clash between Hausas and Igbos.

“This morning, some aggrieved Igbo boys grouped themselves to attack Hausas living in Waru and Wumba village; they believe the thugs who attacked and burnt houses in the community were Hausa-Fulani’s.

“When the incident occured, some of the thugs were caught (Hausas) and they confessed they were given N500 each by a yet to be identified government agent to hijack #EndSars protest in the area.