Home » 2019 » Imo: Uzodinma optimistic Supreme Court will not overturn itself

Imo: Uzodinma optimistic Supreme Court will not overturn itself

by Bayo Millz
in Politics
Reading Time: 3 mins read
A A
0 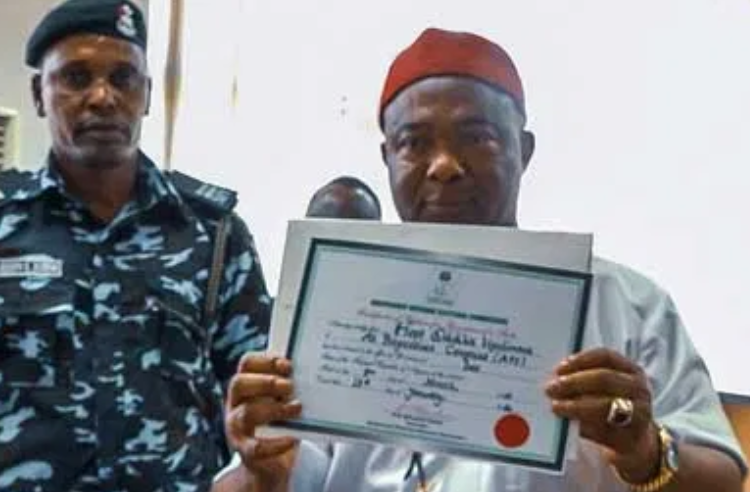 Gov. Hope Uzodinma of Imo has expressed optimism that the Supreme Court would not reverse its judgment that sacked his predecessor, Emeka Ihedioha, and declared him winner of the March 19, 2019 governorship election.

The apex court had, on Jan. 14, removed Ihedioha of the PDP on the ground that he did not score the lawful majority votes in the Imo governorship race.

The court said it arrived at that decision after adding votes scored by Uzodinma in 388 polling units, which showed that he won the race.

It subsequently declared him winner of the election and ordered the Independent National Electoral Commission (INEC) to give him a certificate of return as elected Imo governor.

Ihedioha has, however, vowed to return to the Supreme Court with a view to seeking a review of the judgment that removed him from office.

Uzodinma, who spoke with State House correspondents after a closed door meeting with President Muhammadu Buhari on Friday in Abuja, said that the matter was already “a concluded case”.

“I am not disturbed by the PDP’s move to seek a review of the judgment. I am not concerned because I believe they are going back to the Supreme Court based on falsehood because the number of accredited votes outside the excluded votes is what they are talking about.

“We went to court with an issue of exclusion; we didn’t go to court complaining about election malpractices, violence and all of that. So, it is a peculiar case.

“My case can be likened to that of Jim Nwobodo vs Onoh and Omoboriowo vs Ajasin – It is the position of the Supreme Court that where an election has been announced at a polling unit, INEC is bound to collect the result and enter the results into the Form EC 8B.

“So, let INEC tell us what happened; I’m a lawmaker and I participated in the amendment of the Electoral Act. Election petitions are timed.

“As far as I’m concerned, the 60 days left for Supreme Court to look into that matter has expired. I’m not a lawyer but with my little knowledge of law making, I understand what is in the Electoral Act.”

The governor, who was accompanied by the National Chairman of the APC, Mr Adams Oshiohmole, during the visit, pledged to transform the living conditions of the inhabitants of the state.

He particularly promised a better life for Imo workers, saying that he had already paid all outstanding salaries of civil servants in the state.

“For 12 years, no governor visited the civil service secretariat, I was there two days ago and water has not been available to the secretariat for the past nine years.

“Two days after my visit, water is running there now. They have been re-connected to electricity and the generators are being worked on now.

“I am sure they will see good governance from a man with experience, working in consultations with political stakeholders in the state. I think we can do it differently and the narrative will be acceptable to the people,’’ he said.

Oshiomhole, who also spoke to the correspondents, explained that they were in the presidential villa to introduce Hope Uzodinma as the governor of Imo to President Buhari.

He said: “The governor of Imo, Sen. Hope Uzodinma, is not a stranger to the president. He has been part of the APC family; he has played very decisive roles when it mattered in the affairs of the party.

“So, the purpose of today’s meeting is just to introduce him as the new executive governor of Imo.

“President Buhari is very excited that we have established our foothold in the heart of the south east. And it coincides with the president’s vision of uniting the country.

“Now, we can truly say that we not only control the centre, we have governors in each of the six groups-political zones and I believe that is good for our party and for the government.’’