by Abimbola Fabunmi
in Football, Sports
Reading Time: 3 mins read
A A
0 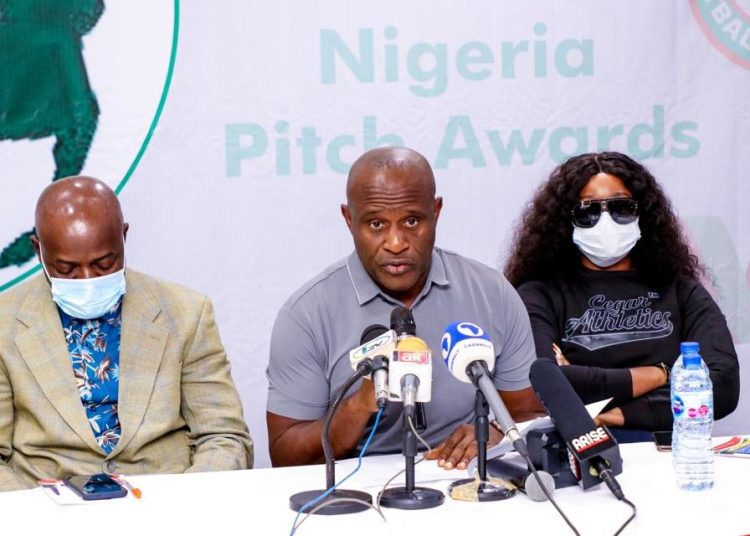 Organizers of the Nigeria Pitch Awards on Saturday announced plans to host the 8th Award Ceremony after the FIFA World Cup play-off final leg between the Super Eagles of Nigeria and the Black Stars of Ghana on 27th March in the Federal Capital Territory, Abuja.

In a statement, Mr Shina Philips, President of the awards said that in addition to announcement of winners for all award categories, Dr Aisha Muhammadu Buhari, wife of the President will be honoured with the Special Achievement in Sports Award for her contributions to the development of women football in Africa.

Other highlights of the 8th Award Ceremony will include announcement of winners in 17 award categories. It will be noted that organizers unveiled nominees for the 8th edition of the awards on 5th January 2022 in Lagos.

The King of the Pitch category will be a straight contest between the Napoli FC of Italy forward Victor Osimhen, Leicester City FC of England midfielder Wilfred Ndidi and KRC Genk hitman Paul Onuachu. In the Queen of the Pitch category, FC Barcelona Feminino striker Asisat Oshoala will square up against the FC Robo Queens sensation, Gift Monday and Linkopings FC of Sweden’s Uchenna Kalu.

In the Football Friendly Governor of the Year category, Governors Babajide Sanwo-Olu of Lagos State, Ifeanyi Okowa of Delta State and Nyesom Wike of Rivers State will compete for the crown.

Kelechi Iheanacho of Leicester City FC is up against Napoli FC’s Victor Osimhen and KRC Genk’s Paul Onuachu in the race for the Striker of the Year Award.

The battle for the Corporate Sponsor of Football Award will be between leading airline, Air Peace, telecom giants MTN and oil and gas solutions provider AITEO Group.

PHOTO: King of the Pitch, Wilfred Ndidi receives his award from Ahmed Yusuf, Chairman of the NFF Technical and Development Committee, at the last edition of the Nigeria Pitch Awards.

The Nationwide League One (NLO) has released a list of instructors and officials for the first batch of 2022 Season NFF/NLO/Berackiah Coaching Clinic which commences on Tuesday in five cities of the Federation.

In a letter to the host Football Associations signed by Olushola Ogunnowo, Chief Operating Officer of the NLO, former Nigeria international and former U17 Boys’ National Team Head Coach, Fatai Amoo as well as Coach Adesina Amosa and Mr Tunde Shamsudeen were listed for the Lagos centre, which site is the Teslim Balogun Stadium, Surulere. Amoo and Amosa will be the instructors with Shamsudeen as official.

The Nest of Champions, Uyo will have Coaches Caleb Esu and Emmanuel King as instructors while Mr Bright Nwanosike will serve as official. Fomer U20 Boys’ National Team Head Coach John Obuh and Coach Evans Ogenyi are in charge in the Oturkpo, Benue State centre with Mr Mike Oyinu as official.

Another former U20 Boys’ National Team Head Coach, Ladan Bosso will dictate proceedings at the Birnin Kebbi centre in Kebbi State alongside Coach Haruna Usman with Abideen Fasasi as official. Coaches Alphonsus Dike and Victor Nwakanma are to hold forth in Awka, Anambra State where Kasarachi Nzeh will serve as official.

Ogunnowo told thenff.com: “This is the first batch of the Coaching Clinic in this second edition of the programme. We believe this second edition will be another fabulous experience for our Coaches. The next batch will include Kwara, Kano, Plateau and Rivers States.”