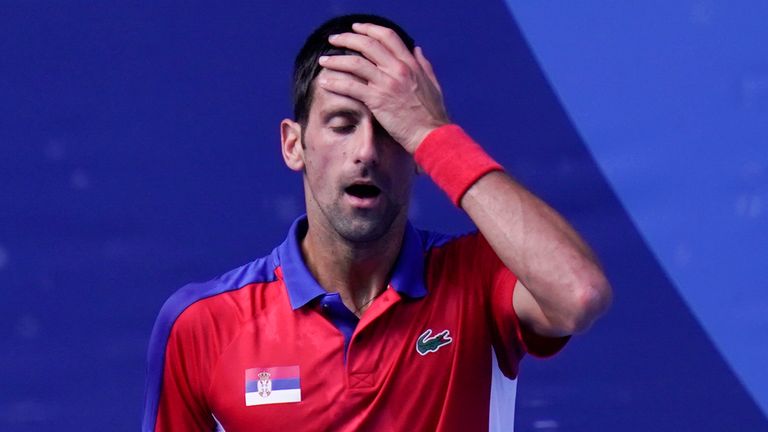 The Serb then went on to withdraw injured from his mixed doubles match for bronze.

World number 11 Carreno Busta wasted a match point in the second-set tiebreak, but the Spaniard never looked back after taking a quick 3-0 lead in the third.

He secured victory in two hours 47 minutes when Djokovic hit a forehand into the net on a sixth match-point.

Djokovic then scratched the mixed doubles he was to contest with fellow Serbian Nina Stojanovic, with organisers stating a left shoulder injury.

The medal went to women’s world number one Ash Barty and John Peers of Australia by walk-over.

Djokovic, 34, is yet to get an Olympic gold, his best being a 2008 bronze, and promised to try again in three years.

“I do have a regret for not winning a medal for my country,” he was quoted as saying.

“Opportunities missed both in doubles and singles. I didn’t deliver yesterday and today, the level of tennis dropped, also due to exhaustion, mentally and physically.

“But, I don’t regret coming to the Olympics at all.

“I know that I will bounce back. I will try to keep going for Paris Olympic Games, I will fight for my country to win medals and I’m sorry that I disappointed a lot of sports fans in my country, but that’s sport.”

But he can still achieve a rare calendar year grand slam if he wins the US Open starting on Aug. 30.

But that was after the Serbian was disqualified in the first set when a ball he hit in frustration struck a lineswoman.

On Saturday, Djokovic sent one racquet flying into the stands early in the third set.

He then got a warning for destroying another one as the final set turned in favour of his opponent.

“It was an emotional outburst and it happens,” said Djokovic. “It’s tense on the court. In the heat of the battle. It’s not the first time and not the last time probably.

“It’s not nice of course but it’s part of, I guess, who I am. I don’t like doing these things.

“I’m sorry for sending this kind of message but we’re all human beings and sometimes it’s difficult to control your emotions.”

'Tinubu not dead, sick nor hospitalised'