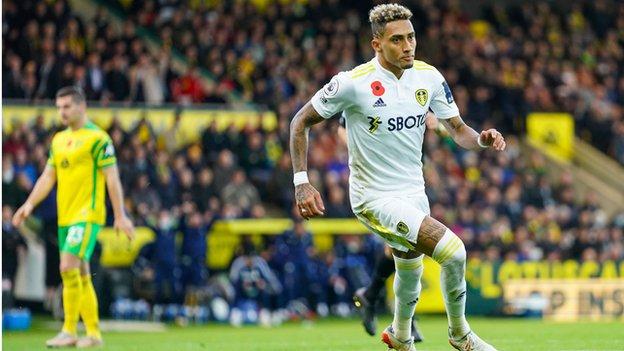 Bottom club Norwich City remain without a Premier League win 10 games into the season after slumping to defeat against fellow strugglers Leeds United at Carrow Road.

After a dour first half, the match burst into life when Raphinha dribbled past three players to fire the visitors into a 56th-minute lead after being picked out by Dan James.

But Leeds restored their advantage on the hour through Rodrigo’s long-range effort after Norwich had lost possession outside their own box.

It was an improved performance by the Canaries after their humiliating 7-0 defeat at Chelsea last week, but Daniel Farke’s side have now lost eight of their 10 matches since winning the Championship with 97 points last season.

James went closest to scoring in the first half after rounding Tim Krul but Grant Hanley was in the right place to clear his attempt off the line.

The hosts at least showed more desire than they did at Stamford Bridge, but once again they lacked any real attacking threat.

Teemu Pukki and Mathias Normann both went close with first-time attempts and Milot Rashica forced a save from a free-kick.

Norwich also felt they should have had a penalty in the early stages when the ball struck James but referee Anthony Taylor waved away their appeals.