Why Nigeria may not achieve 30% broadband penetration in 2018

The Nigerian Communications Commission (NCC) has said that the country may not achieve the 30 per cent broadband penetration target by the end of 2018, due to some challenges.

The Head, Technical Standard and Network Integrity, Mr Bako Wakil said this during the ”Broadband Engagement Forum” in Lagos.

Wakil, who is also the Alternate Chairman, Broadband Implementation and Monitoring Committee, said that the challenges militating against 30 per cent broadband penetration include high Right of Way (RoW) charges and multiple taxation.

He cited other challenges as multiple regulation and delays in obtaining site acquisition permits.

Wakil said that in spite of the challenges, the commission was still determined in its pursuit of the target, as the country had achieved 22 per cent broadband penetration.

According to him, the National Broadband Plan (NBP) provides the roadmap and timelines to deliver a five-fold increase in broadband penetration, that is, from six per cent in 2013 to 30 per cent in 2018.

”Execution of the plan is to provide available, accessible and affordable broadband services to all citizens.

”The plan is to transform the Nigerian economy to a digital knowledge-based economy for national development,” he said.

Wakil said that the commission had engaged the National Executive Council (NEC) and the Nigerian Governors’ Forum (NGF), proffering solutions to the challenges.

He said that some governors were charging as high as N5,000 per linear metre for RoW, some charge N500, while the federal government charged N145.

According to him, broadband infrastructure is critical for the socio-economic transformation of the country.

”In order to address the deficiency of infrastructure, the commission has licensed six of the seven Infrastructure Companies (InfraCos) to deploy broadband infrastructure across the country.

”In order to succeed, we urge you – State Executives –  to consider our recommendations and mitigate the various challenges plaguing the effective penetration of broadband in the country.

”There is the need to harmonise Right of Way charges on state government highways with the federal at the cost of N145 per metre.

”State governments should assign single point for approving RoW application and limit the approval process to a maximum of 30 working days.

”States should mandate installation of utility ducts on road shoulders and buildings during construction and rehabilitation,” he said.

Wakil called on the governors to stop multiple taxation and eliminate multiple regulation, so as to boost broadband penetration.

Mr Tony Ikemefuna, Head, Fixed Networks and Converged Services, NCC said that broadband in the Nigerian context was an internet experience where the user could access the most demanding content in real time at a minimum speed of 1.5 Megabit per second (Mbps).

According to Ikemefuna,  broadband is an enabler of economy and the cornerstone of national competitiveness.

He said that statistics had shown that 10 per cent broadband penetration would lead to 1.3 per cent increase in the Gross Domestic Product (GDP) of a country.

The Head, Regulatory Services, Mainone, Mr Ifeloju Alakija, said that the InfraCos were to bridge the fibre broadband infrastructure gap and accelerate Fourth Generation (4G) services in the country.

Alakija said that in 2015, Bitflux, MainOne and IHS were licensed through an open bid to build open access fiber within their zones.

”Three years later, the impact of the National Broadband plan is yet to be felt as the licensed InfraCos have not been granted approval to start work,” he said. 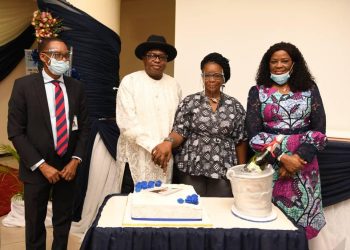