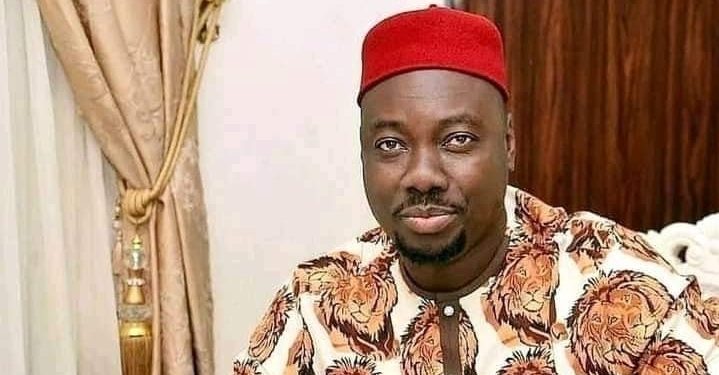 Talk of the town businessman and chairman of Cabana Group, Obinna Iyiegbu popularly known as Obi Cubana has vowed to start and complete his late mother’s church building in the village in 6 months.

TheNewsGuru.com (TNG) reports the renowned entertainer, entrepreneur, philanthropist, and show killer made this known via his Instagram profile on Sunday following the outing service of the late mother, Ezinne Iyiegbu.

The burial of late Mrs Iyiegbu has been the talk of the town, sustaining social trends in the past few days, with the burial culminating in an outing service on Sunday.

After the outing service, Obi Cubana taking a selfie video at the late mother’s church premises, said by December the church would have been completed.

“Today, we have resolved that by December, we will finish this church. In memory of my mum, we are going to build this church in six (6) months.

“These men here; I won’t disclose their names and their identities but God will use them to finish this church in record time,” Obi Cubana said.

Mrs Iyiegbu, who passed away in December 2020, was buried on Friday, at Oba in Idemmili South local government area of Anambra State, where the outing service was held.

Obi Cubana has also promised to give 300 youths from the community, where his mother was buried, N1 million naira each, that is N300 million, in memory of his late mum.