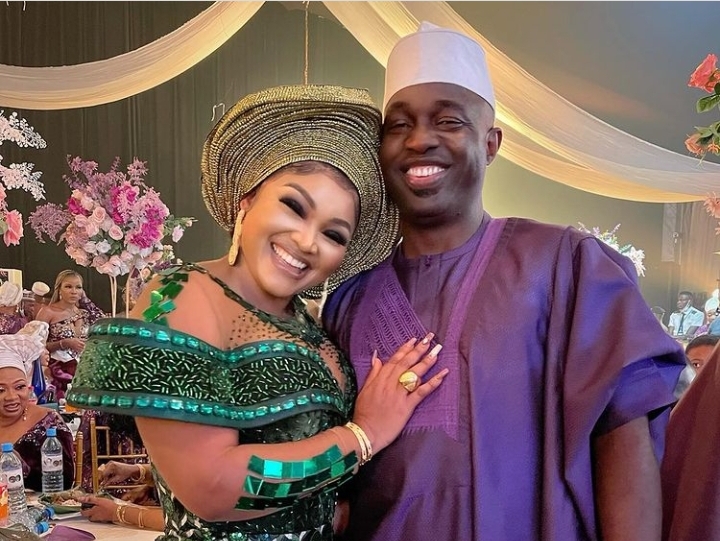 Mercy Aigbe’s husband, Kazim Adeoti has narrated how his first wife, Funsho Adeoti left him with no other option than to marry a second wife.

TheNewsGuru.com (TNG) reports Kazim as saying that Funsho forced him to marry Mercy as his second wife when she permanently relocated to the U.S.

Kazim made this known following the first wife’s recent outburst on social media.

Recall that Funsho took to her social media page to publicly warn her husband and Mercy over the home they currently live in.

The drama started after Mercy shared photos and videos of herself in her husband’s house on Sunday.

However, this did not sit well with Funsho who warned the Nollywood actress to take the posts down within 12 hours.

However, Mercy did not listen, but instead posted another video of herself in the house.

This infuriated Funsho, who then went online to reveal that she furnished the house with her hard-earned money and threatened to take brutal action against her husband and Mercy.

This prompted Kazim to weigh in to her claims and threats in a statement shared on his Instagram page.

He disclosed that he built the house himself and his ex-wife only bought some furnishing for the house, to which he refunded part of the money to her.

He added that his first wife forced him to marry a second wife when she permanently relocated to the U.S, adding that there is nothing wrong with his action because his religion, Islam, permits him to marry more than one wife as long as he can take care of them.

“I have read many things that have been written about me and my family. Many of which are fabricated lies and some directly from my first wife (which understandably is angry married a second wife).

“At this point it is necessary I put record straight. I have two wives. One lives in the US while the other lives with me in Nigeria.

“As a matter of fact, just got back from America 3 days ago where I spent quality time with my family and tried to mend fences with my first wife who is obviously still angry I married a second wife (A move my religion permits as a Muslim).

“And talking about being a Muslim and a responsible man, I make sure none of my family in US or Nigeria is suffering.

“It is laughable that some people said I have abandoned my US family in as much as I travel to see them often.

“For the record, I ensure my US family gets 1500 dollars since 2016 monthly until recently when I reviewed it to 1000 dollars cos our daughter is now in the private university and have been solely responsible for her school fees and upkeep.

“In as much as there is nothing bad in husband and wife building house together, in my case, we did not. I built the house by myself.

“It is not in my character to speak ill of people who were once friends not to talk of my first wife (who is still my wife as we speak).

“I will not speak ill of her for the sake of good and bad times we shared and the good kids that God gave us.

“It is understandable that my first wife is unhappy about getting a second wife but she left me no choice when she relocated permanently to the US.

“I am a muslim and Islam permits me to marry more than one wife as long as take care of them and I don’t maltreat them.

“I can stand before God and man that as a man, have done my best not to maltreat them.

“And I will not paint my first wife bad no matter what or use foul language on her and her family (who have been with us all through this journey).

“When she came to Nigeria recently, we, she, myself, her family and mine had zoom meeting (we didn’t see physically). And our meeting was opened, honest and respectful.

“Many of them are surprised at the turn of event and the dragging of family name in the mud but as it is, we have to leave everything in the hands of God and let God continue guide us and reward us all,” Kazim narrated.