by Emman Ovuakporie
in uncategorized
Reading Time: 4 mins read
A A
0 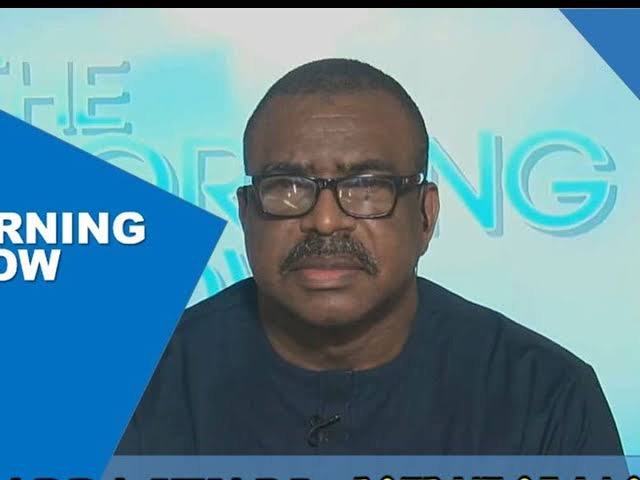 A development strategist, public policy analyst and media columnist, Magnus Onyibe’s book on ‘Becoming President of Nigeria: A Citizen’s Guide’ will be formally launched on Tuesday.

The new book focused on how to become president of Nigeria , written by Magnus Onyibe , a development strategist, public policy analyst and media columnist has just been released to the public.

The 357 pages, twelve (12) chapter book chronicles the evolution of political leadership in Nigeria and outlines the turning points in the nation’s checkered political history.

NDIC gives update on sale of Polaris Bank, other banks

With keen eyes on the ethnic and religious sensitivities responsible for the mutual suspicion of one another by the multiple ethnic nationalities that make up the country, the author shines light on how Nigeria is practicing zero sum politics via rotation of presidential power between north and south agreement which has inadvertently been undermining the unity of the country and is responsible for lack of real socioeconomic progress even as it is fueling ethno-religious disharmony in Nigeria.

In the foreword for the book which is written by professor Bolaji Akinyemi, ex foreign affairs minister (1985-7) and deputy chairman 2014 National Confab, the erudite professor of international affairs makes the case that “Nigeria is not a zero -sum politics where what one gains , the other loses” And concluded that “It can be a multi-sum politics where structure and gains are shared with equity.”

The book traces the origin of the entity known as Nigeria and dwells on what should bind the multiple ethnic nationalities that formed Nigeria in 1914, such as trade and notes regrettably, that a combination of ethnicity and ‘ religiousity’ have been thwarting the progress and prosperity of the good people of Nigeria. And according to the author , Onyibe , the book is guaranteed to enable readers learn first hand how feasible Nigeria as a nation is , via the nuanced , sometimes vulgar , even coded granular details about political power play in high places in our country and ultimately guides citizens on how to become president of Nigeria.

The author recalls that Nigeria became a country after Frederick Luggard, a British merchant turned statesman , determined to reduce administrative inconvenience of leading then northern and southern protectorates of British empire , convinced the Queen of England in 1914 to amalgamate both of them into one country.

And over 61 years after independence from Britain, the much sought after transition from a country that the British founded, into a nation nurtured by Nigerians for Nigerians , has been a torturous and tumultuous journey of which only a few baby steps have been taken.

That is as opposed to the giant strides which the founders of the country had envisioned that Nigeria should have taken by now , hence they fought vigorously to secure her independence from the British colonizer in 1960.
And according to Onyibe , the book is guaranteed to enable readers learn first hand the political complexities inherent in Nigeria as a nation , via nuanced , sometimes vulgar , even coded granular details about political power play in high places in our country. In the author’s view , the ultimate mission of the book is to enlighten citizens on how to become president of Nigeria by highlighting the pre requisites for ascending the exalted office .

Remarkably, the timing of the release of the book is significant as it is at a critical period when the politics of who becomes the next president of Nigeria is occupying the right and center of national discuss.

For instance, as the incumbent, President Mohammadu Buhari is currently in the twilight zone of his two terms, eight (8) years opportunity to lead Nigeria which ends next year, (2023) the author of the book , magnus onyibe posed the following questions:
How can Nigeria elect a president who will pursue the agenda of multi-sum politics rooted in equity and inclusiveness and driven by patriotic leadership which would build upon the the foundation of progress laid by our forebears ? How can a system that eschews the current winner takes it all attitude of ethnocentric leaders emerge propelled by presidential rotation policy evolve ? Would the 2023 general elections be the turning point?
There are multiple salient points in the book, but the most striking is the fact that , of the five (5) presidents that have become president of Nigeria since independence- Shehu Shagari , Olusegun Obasanjo , Umaru Yar’adua , Goodluck Jonathan, and Mohammadu Buhari, three (3) of them -Shagari, Yar’adua and Jonathan have been school teachers and two (2) of them -Obasanjo and Buhari , are ex soldiers.

The author avers that the major purpose of the book is to share with every Nigerian , the knowledge and hope that they can become the president of Nigeria if they try hard enough, no matter their respective stations in life.
So, the likes of Dele Momodu, Omoyele Sowore , Kingsley Moghalu and Sam Ohuabunwa as well as Dumebi Kachikwu amongst others who are not professional politicians, but have thrown their hats into the ring for the presidential primaries race in 2022/2023 , should not despair.
And that is because history is on their side.

If they don’t win now perhaps because they lack the political structures and household name recognition required to accomplish their mission , they would be in better position to win the next time they contest because they can build on their past experience and exposure , as they would have chalked up some national name recognition and also build structures in the course of campaigning for the presidency in 2023.

The book also emphasis the belief that all hope is not lost about the unity and progress of Nigeria as there is a sort of convergence in the reports of the panel set up by the ruling party at the center, APC to chart the way forward, led by Kaduna state governor , Nasir El Rufai and a similar committee established by the main opposition party, PDP led by the governor of Bauchi state ,Bala Mohamed. The nuggets of wisdom in both reports, according to Onyibe have the capacity to engender national rebirth in our beloved country if implemented.

The book which is published by lnspire media services limited located at lnspire Automotive City, (Former Lapal House Showroom) no 235 lgbosere road, opposite Igbosere magistrates court, lgbosere , Lagos island , is embellished with illustrations by the award winning political cartoonist, Tayo Fatunla.
It will be formally launched in Abuja on 10th May, 2022 . It is currently on sale by the publisher via telephone no: 09077958606.

The book can also be purchased from reputable bookshops country wide and
is available to global audience via Amazon platform too.
Thank you.

President Buhari jets out to Cote D' Ivoire for UNCCD