by Ediri Oyibo
in News, Politics
Reading Time: 4 mins read
A A
0 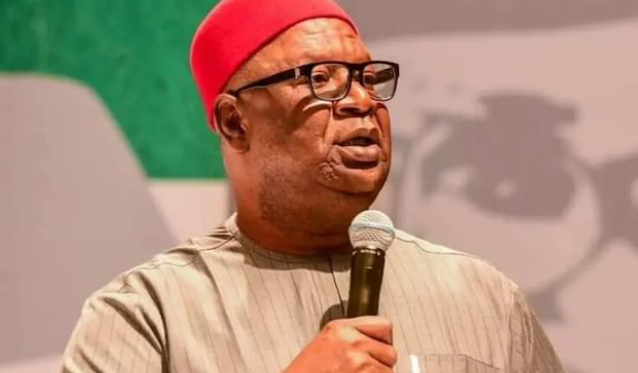 A presidential aspirant on the platform of the PDP, Chief Anyim Pius Anyim, unveiled his roadmap to clinch the top post on Friday, saying the magic wand was for the PDP to re-invent itself.

Speaking at a consultative meeting with leaders of the PDP from the six geo-political zones in Abuja, Anyim promised to return Nigeria to the path of peace, unity and progress, if elected president next year.

Nigeria is on course again for a general election, where many political heavy weights and feather weights have expressed their interests to contest for the plum job.

Anyim, who was a former Senate President and Secretary to the Government of the Federation, said that the PDP stood a great chance to return to power after its dramatic fall from power.

He, however, warned the party to avoid the mistakes that led to its fall from power in 2015, saying that Nigerians were currently clamouring for the return of the party to steer the ship of state.

The former lawmaker, who cited some successes recorded by the PDP while in power, noted that the achievements made by the party did not come overnight but were done systematically and were planned for.

“We were planning that for the second tenure of President Goodluck Jonathan we would stretch out these plans and policies, to deliver maximum results but unfortunately, that administration was truncated.

Anyim advised PDP leaders and members not to repeat “the mistake of 2015’’ when some of them pulled out of the party to other parties to pursue their political ambitions.

“In 2015 some of us in PDP, simply decided to pull out of PDP to bring that government down. We were thereafter, plunged into darkness. That is why we are where we are today.

“Let nobody confuses you. Let nobody mislead you. We were confused and misled in 2015 and that is why we are here. We now have an opportunity to come together and re-invent ourselves.

“Do you agree with me that Nigerians are saying please return us to 2015? If Nigerians are begging us to return them to 2015, do you have any reason not to support me?”

Anyim argued that if the PDP must rescue Nigeria it has to first, reinvent itself and set itself on the path of equity, fairness and justice.

“When we set ourselves on these paths we will be able to lift our country with a pedestal that will secure the buy-in of everybody and the commitment of everybody to continue to build our nation.”

Anyim said that one of the major problems of Nigeria was that people never realised that politics was not just a game but a platform on which nations were built, “hence games were being played with people’s destiny’’.

“I want to say that in returning Nigeria to the part of growth, we have to build a new foundation or at least return to where we stopped in 2015.”

Giving a background of how he was first elected into the senate at the age of 37, the second time at 38 and how he became senate president at 39, Anyim said that he inherited a seriously troubled senate but that he stabilised the upper chamber when he stepped in.

“I want to say that the crisis of our nation today requires a unifier to tackle. It demands a crisis manager. It demands a stabiliser and these are all that I am known for.

“I will build consensus across board. I will make sure I secure the buy-in of every component of our polity before I deploy any policy that will help us move forward as a nation.”

On the current insecurity in the country, Anyim said that tackling the menace was beyond recruiting more soldiers or buying more arms.

He said that the problem required addressing the fundamental problems of the nation and setting up a platform that everyone would key into.

“The challenge before us currently is a challenge that we have to go back to the basics to understand our problems with a view to re-building our nation.

“When you set out an acceptable platform and an acceptable foundation that every person can commit to is when you have a solution to the problem.”

Anyim attributed the insecurity in the country to what he characterized as “betrayal of democracy, bad governance and bad leadership’’.

The presidential aspirant recalled that before the general elections that resulted to the fall of the PDP, the atmosphere in the country was generally peaceful.

“I will address insecurity from its roots and I will nip on the bud and address the situation where people now carrying arms.

Anyim said that the pillar of his political agenda would be to build on consensus and that his economic agenda would be anchored on industrialisation, science and technology as well as innovation

“My social integration programme will be anchored on our women and our youths while our people in the diaspora would be main-streamed into our development agenda.

The aspirant said: “We will run an inclusive government where equity, fairness, justice will be the pillar, where competence, capacity will be the driver.

“Nigeria is so rich to provide for everybody according to their level. Everybody should find space to make a decent living and be proud of this country.

“We shall together build a country all of us shall be proud of, if I’m elected into power,” Anyim assured.