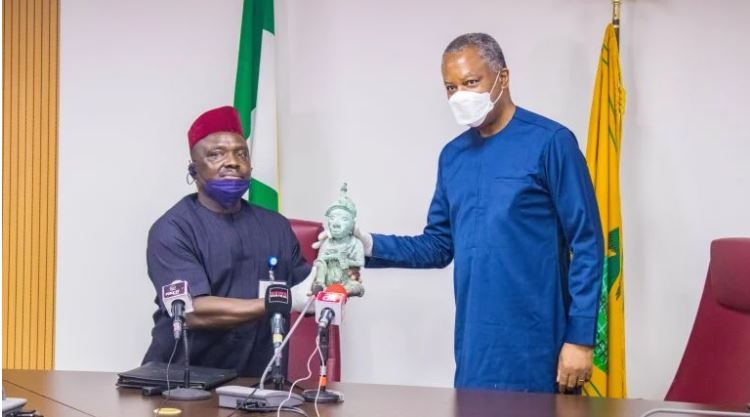 The Minister of Foreign Affairs, Chief Geoffrey Onyeama, on Thursday in Abuja received a stolen Ile-Ife artifact recovered from Mexico.

Receiving the artifact, he called for a more secured border to prevent future occurrence of theft.

Onyeama collected the artifact from Dr Yakubu Dadu, Charge d’Affaires of the Nigerian Mission in Mexico.

The minister hailed the Embassy’s efforts in recovering the artifact.

He said that the interventions of Nigerian Envoys in recovering stolen possessions of the country shows the important works they were doing as against negative reports of Nigerian missions on social media.

Onyeama also appreciated the government of Mexico for its cooperation in ensuring that the artifact was duly returned to Nigeria.

He however stressed the need for sensitising Customs officials at borders, explaining that it is better to secure national heritages from being stolen than to start negotiation for their return after being stolen.

“This Ife bronze was stolen from Nigeria and it was intercepted in Mexico and our Ambassador at the time, Amb. Aminu Iyawa, was very dynamic when he noticed it displayed at the Airport in Mexico and was a little bit suspicious.

“Due to his enterprise, detective work and his diplomatic skills, after a year he was able to find out the origin of the work and the fact that it was stolen and he engaged with Mexican Authorities.

“And was able to get the Mexican authorities after proving that it was of Nigerian origin to hand it over to the Nigerian people.

“It was initially to be delivered home last year but because of the COVID-19 lock down he was not able to do so. This is all part of the excellent works that our diplomatic missions abroad are performing.

“Sometimes on social media we have negative narratives about our diplomatic missions but I think it is also important to recognise the important works they are doing as Envoys of Mr President.

“Delivering such things back to the country requires a lot of negotiations, a lot of time to achieve these kind of results.

“There also need to be sensitisation of Custom officials to let them know there is a black market in these artifacts so as to have border measures.

“We do not want to be negotiating when they are outside our territory but what we can also do is to secure them from within and ultimately it is going to be about intelligence and Customs and border measures,” Onyeama said.

He 0 said there would be an official presentation of the artifact to the Minister of Information and Culture in the presence of the Ambassador of Mexico to Nigeria, after which it would be handed over to the National Commission for Museums and Monuments.

Mr Gimba Muhammed, the Acting Director General, National Commission for Museums and Monuments, said that a lot of measures are already put in place to prevent stolen artifacts from leaving the country.

Muhammed however noted that most of the artifacts were stolen from the country during the colonial era as the present security state of museums in the country would make it difficult for any artifact to be stolen.

“There are lots of measures in place to end theft of artifacts. There are countries to countries agreements.

“Recently there was an ECOWAS Head of Cultural Directors Ministries which papers were presented by ECOWAS countries to restitute some of these our properties from any country that they are found.

“If you find that of Nigeria in Côte d’Ivoire they bring it and if you find theirs here we return it to them,” Muhammed said.

“Museum as an Institution has evolved in Nigeria and are better secured now and I can vouch that hardly can anybody steal objects from Nigerian Museums.

“We are making arrangements to build a Museum in the standard of the Western World like the one we are making efforts with the Edo State government to build and even some foreign governments,” Adebiyi said.

Maldini a great mentor for me - Chelsea defender