How body of Vanguard reporter, Tordue was found – Police 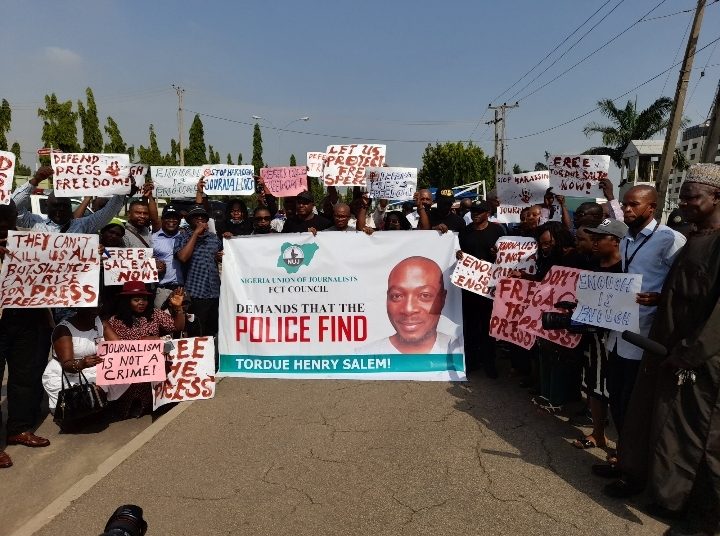 The Nigeria Police have said that the body of the missing Vanguard Newspaper reporter, Tordue Salem was found at the Wuse General Hospital Mortuary in Abuja.

The Force Public Relations Officer (FPRO), Mr Frank Mba, announced this at a news conference briefing in Abuja on Friday.

The Vanguard journalist was reported missing on Oct. 13.

Mba said the body of the reporter was found after weeks of intensive investigations by operatives of the Nigeria Police.

He said that the body was deposited at the mortuary after being knocked down by a “hit and run” commercial driver in charge of a Toyota Camry, 2013 model, with registration number BWR 243BK.

On interrogation, Mba said that the driver said that he had a hit and run incident somewhere around Mabushi-Wuse interchange Oct. 13, the night the Vanguard journalist was reportedly missing.

He said the driver had confessed that, after knocking down the unknown pedestrian at about 10 p.m, he continued his journey and ended up his activities for the day.

“The driver drove his car to Good Friends Garage at Mpape area of Abuja where he normally pack his vehicle daily for a fee.

“At this time, his vehicles had been badly damaged, especially, the windscreen.

“He parked the car at the garage and when he arrived in the place the next morning, he found a broken phone, stocked in between the smashed windscreen.

“The driver pulled out the smashed phone and threw it away to where some young persons playing in the garage picked it up,” he said.

Mba said that the children had made efforts to make voice call with the SIM card taken from the smashed phone.

“On the strength of this, detectives, on Nov. 11, moved to the General Hospital Wuse

“A body believed to be that of Salem was found at about 11.20 a.m at Wuse General Hospital Mortuary.

“In addition to the physical identification, detectives also searched the body of the late journalist.