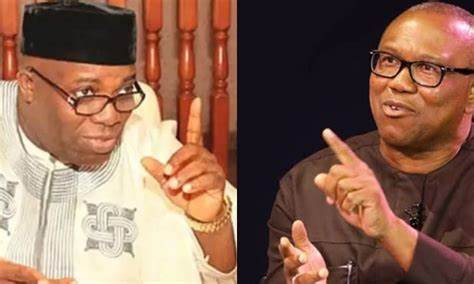 Dr Okupe tendered his resignation letter on Thursday to pave way for the presentation of Yusuf Datti Baba-Ahmed as his substitute.

He disclosed that his unveiling was initially scheduled to hold Thursday afternoon but had to be shifted to Friday due to the inability of the presidential candidate Mr Peter Obi to get into Abuja on Thursday as expected.

Abure further added that Mr Obi travelled to Maiduguri, Borono State capital and was billed to return to Abuja Thursday for the ceremony but unfortunately his flight was cancelled.

The Labour Party had to shift attention to Senator Baba-Ahmed after the crash of the initial romance with the New Nigerian People’s Party Chieftain, Senator Rabiu Kwankwaso who declined to be Obi’s Vice.

The source further said the choice of the former Senator, who is also an economist and a well known anti corruption crusader elicited resounding excitements among the supporters of Obi who believe that they will make a perfect team.

Senator Baba-Ahmed who is in his forties is also considered by Obi’s supporters who are mostly youths as a good bridge between the old and younger generations.

Pairing with a much younger person like Baba-Ahmed is equally considering as a means to seamless transition to the new breeds of leadership in the country.

The former Senator represented Zaria Federal Constituency of Kaduna State in the House of Representatives from 2003 to 2097 and was elected Senator for Kaduna North 2011 under the umbrella of All Nigerian People’s Party, (ANPP).