The study revealed that Nigeria is ranked highest as the country most curious about cryptocurrency since April 2022 with an average score of 371.

According to the survey carried out by CoinGecko, a data collection service using google trends of search terms frequently used by people interested in cryptocurrency, Nigeria also appears number 1 among English-speaking countries of the World with the highest search levels for the  ‘cryptocurrency’, ‘invest in crypto and ‘buy crypto’ worldwide.

Meanwhile, unlike Cryptocurrency, another survey shows Nigeria is the 3rd highest patronizer of Solana 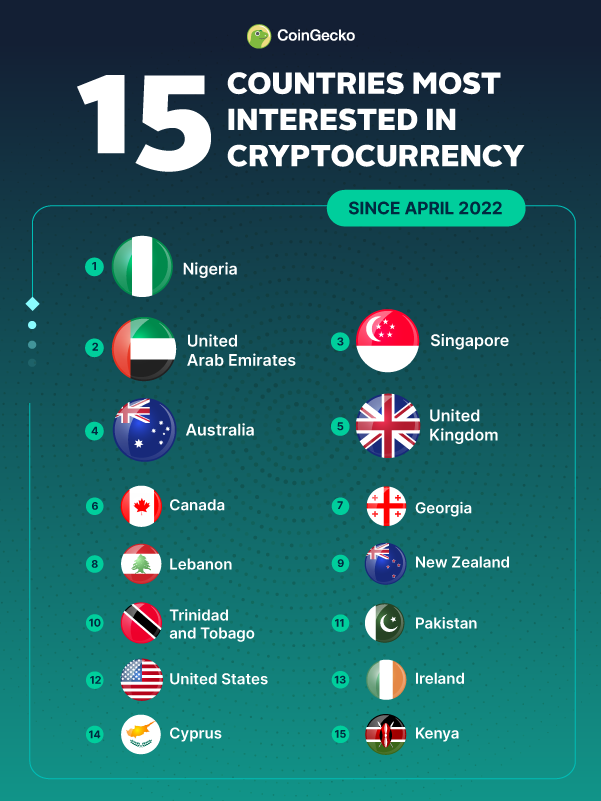 The Arab nation of United Arab Emirates UAE comes second after Nigeria as the world’s second patronizer of cryptocurrency. The country also ranks high in google search for ‘cryptocurrency’, ‘invest in crypto and ‘buy crypto’

Singapore is the third country with the highest search for the phrase ‘cryptocurrency’, ‘invest in crypto and ‘buy crypto’ in the world. In addition to being the country searching for   ‘Ethereum’ the most worldwide, Singapore has got a total search score of 261.

European country of England places fifth in the hierarchy of nations with an obsession for Cryptocurrency in the world with a score of 198 since April this year, placing fifth overall.

Bitcoin, Ethereum, and Polygon are all trending cryptocurrencies in the United Kingdom According to an analysis provided by CoinGecko.

comments from the co-founder of CoinGecko, Bobby Ong, COO stated that there have been price drawdowns in recent times in the world of cryptocurrencies.

“This year, we see a major correction from previous bull cycle highs, which have resulted in significant price drawdowns in an unforgiving macroeconomic environment.

Meanwhile, a separate survey on google trends globally,  reports that only 21% of crypto owners are women — and female ownership of bitcoin and Ethereum are even lower at 15% and 20%, respectively. Of the 121 top crypto companies around the world, only 5 are led by women