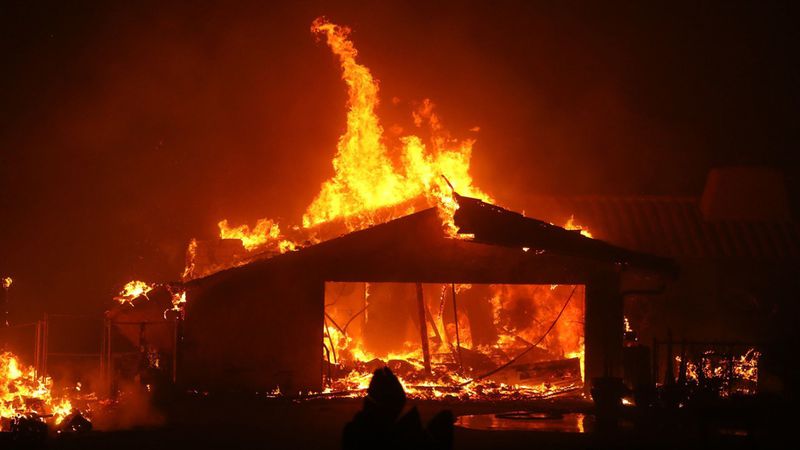 It was gathered that the head of the community went to observe the Islamic prayer in the morning, upon return to the palaace he realized it has been razed by unknown aggressors.

The setting ablaze incident happened just 1 month after Olu of Agodo,Ayinde Odetola was murdered and burnt to ashes in Ewekora Local Government in the state.

An man who spoke on condition of anonymity  said the aggressors broke the window before gaining access to where the man was murdered.

Another source who spoke on condition of anonymity said he sensed the Baale was killed over a land dispute he was involved in, saying that the deceased was arrested by the police over same matter.

The Baale who was supposed to appear in court on the 15th of March over the land issue was already employing measures to resolve the matter and settle out of court before his demise.

Confirming his death, One of his wives, Silifat Muheedeen,  said she was returning from the mosque around 6 a.m. when she saw that the  compound was already engulfed in fire.

“When I saw the fire, I shouted, I didn’t know what was happening. I rushed down, only to discover that my husband was on fire, already dead. We later found out that a window at the back of the house was broken. We didn’t know who killed him.”

His second wife, Iyabode Muheedeen, said she slept in the same room with her husband, saying he left the room at dawn to urinate and pray as usual.

“He used to pray every morning, so he went out around 6 a.m. to urinate and prepare for prayer. After about 15 minutes, I heard my senior wife shouting, ‘fire, fire’. I rushed out to discover that it was Baale that was on fire. He didn’t go out with fire or matches. We don’t know who did this,” said Mrs Muheedeen.

Also confirming the incident  the Seriki of Olowe, Kazeem Dauda,  also coroborated others  that there was a conflict between the Baale and some individuals.

“Few days ago, I was here with him to talk to him not to panic about the case in court. Some people have been claiming ownership of his land. He was even arrested and granted bail in court. He was supposed to be in court again on the 15th of March. He was a gentleman. This would be the first time he would have an issue with anyone.

“I got a call this morning that ‘he burnt himself to death’. I said, ‘how come?’ But when I got here, we discovered the window was broken. He couldn’t have burnt himself like that.” He said

The matter has been reported to the Ogun State police command and investigations are ongoing to unravel the mystery behind the burning of the palace and the Baale’s death.

Nigerians with impounded, accidented vehicles can now reclaim them – IGP