by Abimbola Fabunmi
in Sports
Reading Time: 5 mins read
A A
0 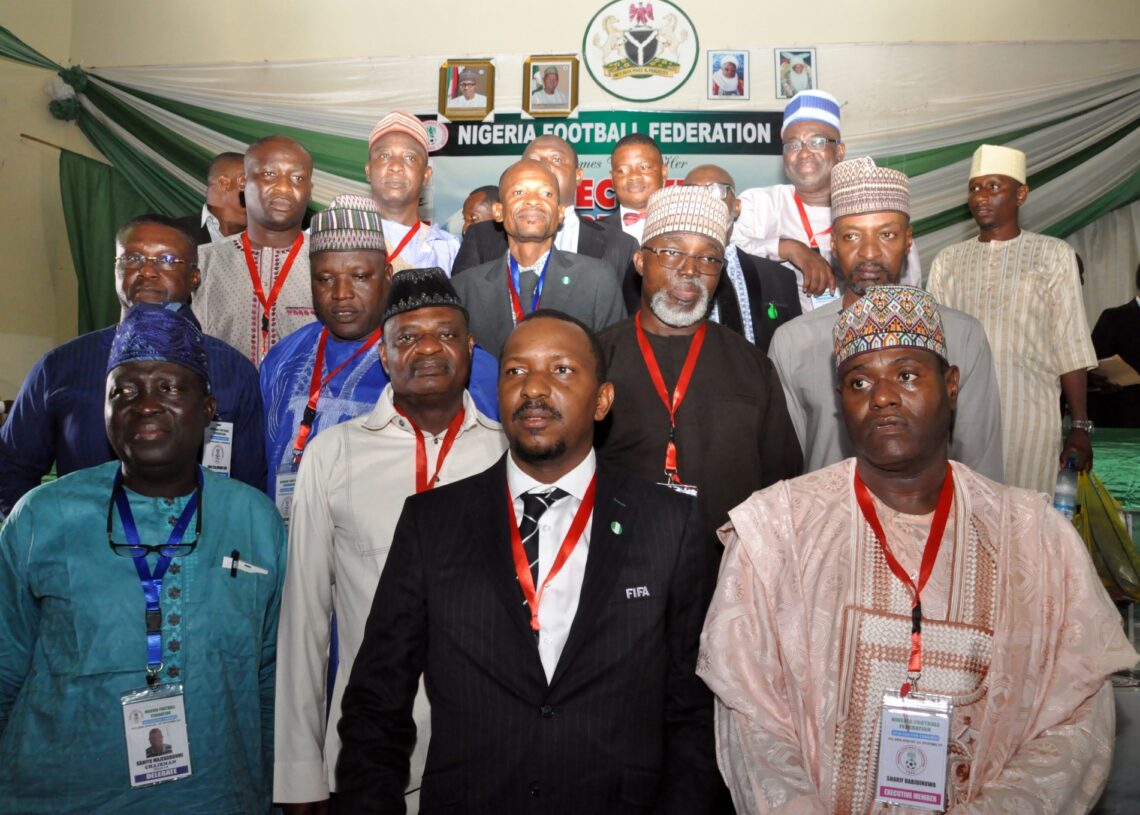 The Nigeria football federation in its Annual General Meeting held on August 18  unanimously agreed to hold its election on September 30 in Benin City, Edo State Nigeria.

The decision to hold the election in Benin City on September 30th was the major talking point  of the AGM held at the Best Western Hotel in Lagos.

However, the Electoral and Appeal committees were immediately set up ahead of the September 30 election.

NFF president Amaju Pinnick has confirmed he would not be re-contesting the NFF presidency position after spending two terms in office.

It was  gathered that the 44-man congress turned down a proposal to have the election held on October 20 against the fixed September 30.

Present at the congress in Lagos on Thursday were the chairmen and secretaries of the NFF’s 44 members (FAs of all the 36 states and the FCT), along with representatives from the leagues, the coaches association, the referees association, the players’ union, NFF executive committee members, invited dignitaries, NFF management and staff, and several other stakeholders.

The Executive Committee of Nigeria Football Federation met on Thursday, 18th August 2022 at the Best Western Hotel, Victoria Island, Lagos to deliberate on important issues in Nigeria Football and resolved as follows:

1) The Executive Committee commended the Federal Government for the support and encouragement that it has always provided for the Nigeria Football Federation, the various National Teams and Nigeria Football generally to grow and blossom in spite of certain debilitating challenges.

2) After listening to the presentation of the 2nd Vice President/Chairman, LMC on the challenges that beleaguered this year’s AITEO Cup competition, the Board adopted resolutions reached at the meeting of the NFF with the owners of Clubs that reached the men’s quarter-finals that the competition reboot at that stage and the Clubs be refunded their expenses for travelling for last-eight matches that did not take place. However, Heartland FC, who defeated Katsina FC in their quarter-final game in Ilorin, are already through to the semi-finals. It was agreed that the competition (men’s version) restarts after the NFF Annual General Assembly of Thursday, 18th August 2022, with the key objective of providing considerable mileage for sponsors, AITEO.

3) Following a detailed presentation by the Head of Delegation of Nigeria team to the 12th Women Africa Cup of Nations in Morocco, the Executive Committee directed its Technical and Development Sub-Committee to hold a meeting and make recommendations on the way forward for the Senior Women National Team, Super Falcons, including but not limited to a thorough evaluation of the capability of the coaching crew to lead the team to a creditable performance at the FIFA World Cup finals in Australia and New Zealand next year.

4) After his solemn declaration that he would not be contesting to retain his seat as President at the next NFF Elective General Assembly, the Board greatly commended the President for his huge sacrifices for Nigeria Football in the past eight years, and wished him success and progress in his future endeavours and pursuits. The President stated that he would be ready at all times to offer his support, encouragement and wealth of experience to the incoming President and the Board.

5) The Executive Committee praised the U20 Women National Team, Falconets for its excellent performance at the ongoing FIFA U20 Women’s World Cup in Costa Rica, at which the team has won all three matches of the group phase and qualified for the quarter-finals as group leader. It noted that the achievement, as well as the triumphs of the U20 and U17 Boys in regional tournaments in Niger Republic and Ghana, and the qualification of the U17 Girls for the FIFA U17 Women’s World Cup India 2022, is a marker of the dedication, vision and investment of the present NFF administration in youth development.

7) The Board directed the Secretariat to ensure that no stone was left unturned in preparations ahead of the African Nations Championship qualifying fixture between Nigeria and Ghana at the end of this month. The first leg of the final qualifying fixture will take place in Cape Coast on Sunday, 28th August while the second leg will hold at the MKO Abiola Stadium, Abuja on Saturday, 3rd September.

1)    The General Assembly expressed heartfelt appreciation of the entire Nigeria Football fraternity to the President and Commander-In-Chief of the Armed Forces, President Muhammadu Buhari, GCFR as a person and the Federal Government as a body, for the continued support and encouragement of the NFF, the various National Teams and Nigeria Football generally.

5)   Following a motion on the floor of the General Assembly, the Congress approved that the present NFF Executive Committee remain in office to conduct the 30th September 2022 elections in order to avoid any form of vacuum.

6)   Congress approved that all decisions reached at the Annual General Assembly, in particular the Electoral Roadmap, be communicated to world football-governing body, FIFA by the NFF General Secretary without delay, for approval, endorsement and ratification.

7)   The General Assembly expressed appreciation to the Lagos State Government for its support and encouragement of Nigeria Football at all times.