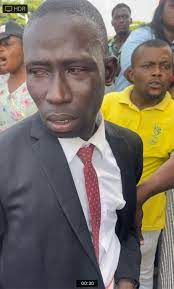 Doubt and dismay were on Thursday morning trailing reports of the arrest of a man with a dagger allegedly on an assassination attempt at the Ibadan rally of Labour Party presidential candidate, Peter Obi.

The news of the arrest of the man dressed in suit with a dagger hidden within was first shared by an Obidient supporter of Mr Peter Obi on Twitter. 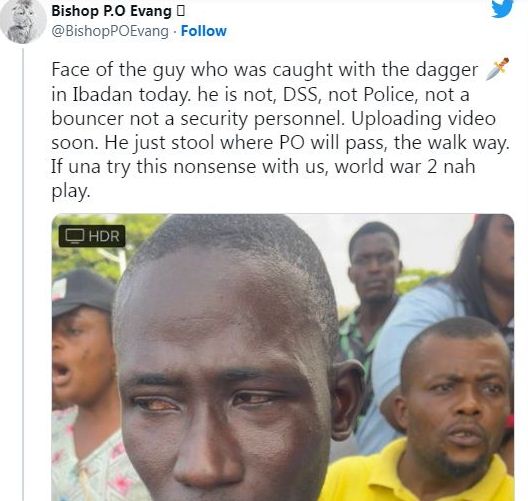 TheNewsGuru.com (TNG) reports that the police in Abuja are yet to give a reaction to the development but the news of the alleged assassination was on Thursday morning generating different reactions from disbelief by critics of Peter Obi who accused the Obidients of lying to dismay by his supporters.

See the reaction from Nigerians below:

AHMED ♚ @AS_Ahmadu: “How are we sure this was not staged? Why will someone want to kill a man who will come distant 4th for Gods sake.”

OPEOLUWA AKINYEMI (M.D) @OpeBee: “The problem is with your numerous lies, it’s hard for pple to believe you guys or take you serious. And please stop the war mongering.”

Ayuba Idris @Ayuba_money: “He is working for Peter Obi , I heard the man wearing Labor party tag saying he is with me! Please you guys should stop telling lies like your candidate.”

Bishop of no Diocese,2: “Do not, I repeat, do not hand him over to the police. You should have taken him to a secluded area where information would be extracted from him by any means possible before revealing this, the Nigerian police I know will cover him up and release him soon.”

Consigliere @kaizer747: “The reason we always say that PO needs to be security conscious. He is too accessible for a Presidential candidate.”

Dr. Ugo M. Kelechi (PhD) 🌈 @KelechiPhD: “He should be made to reveal his sponsors.”

Qatar 2022: Homeboy Embolo scores for Switzerland as they beat Cameroon 1-0