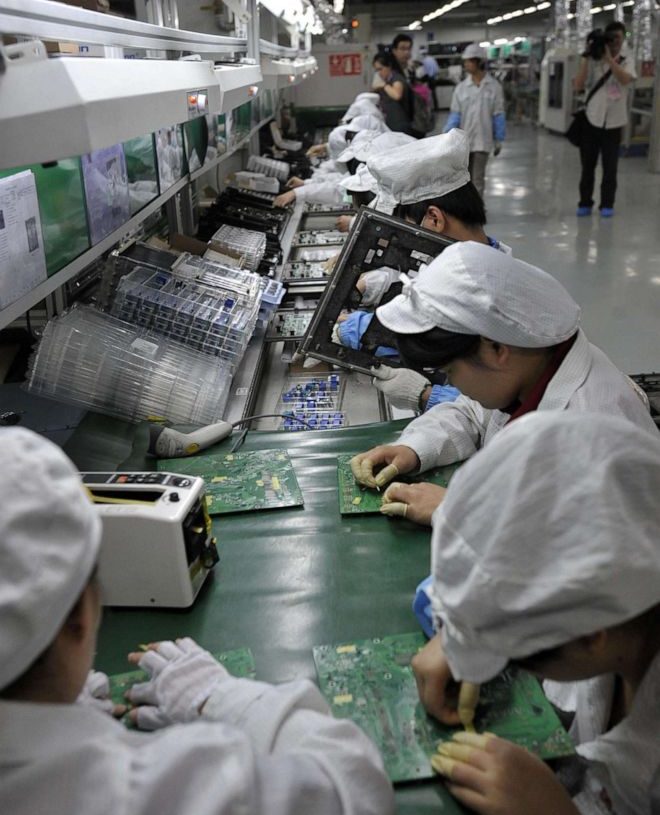 274
SHARES
1.4k
VIEWS
Workers at the world’s largest iPhone factory in China (Foxconn campus) and hazmat-suited police officers have clashed.
Foxconn campus is where about half of Apple‘s smartphones are assembled.
The workers were seen confronting police, some in riot gear, on Wednesday, according to videos shared over social media.

The videos show hundreds of workers facing off with law enforcement officers, many in white hazmat suits, on the Foxconn campus in the central Chinese city of Zhengzhou. In the footage, now blocked, some of the protesters could be heard complaining about their pay and sanitary conditions.

The scenes come days after Chinese state media reported that more than 100,000 people had signed up to fill positions advertised as part of a massive recruitment drive held for Foxconn’s Zhengzhou plant.

Accounts on Chinese social media point to a combination of strict “zero-COVID” measures, a brewing labor dispute and the pressure for factory workers to deliver ahead of a busy holiday season that caused frustration among employees at the manufacturing plant in the central Chinese city of Zhengzhou.

Videos that appear to show hundreds of angry workers throwing sticks and bricks at security forces and then officers subduing and beating protestors popped up on Chinese social media Tuesday night into Wednesday as quickly as Chinese government censors raced to delete them.

The enormous factory complex is operated by Foxconn, the Taiwanese company that is the world’s largest technology manufacturer.

TheNewsGuru.com (TNG) reports that Apple (AAPL) has been facing significant supply chain constraints at the assembly facility and expects iPhone 14 shipments to be hit just as the key holiday shopping season begins. CNN has contacted the company for comment on the situation at the plant.

In late October, tens of thousands of Foxconn workers walked off the job at the same factory fearing a COVID lockdown after widespread claims that the city of Zhengzhou had mismanaged a COVID-19 outbreak.

This led to Apple issuing a statement earlier this month that shipments of its latest lineup of iPhones will be “temporarily impacted” by COVID restrictions in China.

In an effort to keep remaining workers to stay on, the local government and Foxconn offered generous incentives and started an aggressive recruitment drive for new workers willing to move to the Zhengzhou campus.

Videos of many people leaving Zhengzhou on foot had gone viral on Chinese social media earlier in November, forcing Foxconn to step up measures to get its staff back. To try to limit the fallout, the company said it had quadrupled daily bonuses for workers at the plant this month.

Recruitment ads circulating on Weibo, China’s version of Twitter, touted a 6,000 to 10,000 Yuan (roughly $840 to $1400) signing bonus. Those ads began being censored late in the day Wednesday.

On Wednesday, workers were heard in the video saying that Foxconn failed to honor their promise of an attractive bonus and pay package after they arrived to work at the plant. Numerous complaints have also been posted anonymously on social media platforms — accusing Foxconn of having changed the salary packages previously advertised.

Last week, an executive at the Foxconn campus told the Chinese business outlet Yicai that they had successfully recruited more than 100,000 new workers who began arriving from around China last weekend.

Foxconn in a statement acknowledged the “violence” at the plant and said “on the evening of November 22, some new hires to the Zhengzhou Park campus appealed to the company regarding the work allowance, which they had doubts about.”

The statement added, “[Foxconn] has emphasized that the allowance has always been fulfilled based on a contractual obligation.”

Foxconn also highlighted “speculation” among the new recruits that they would be sharing dorms with COVID positive employees, calling it “untrue.”

The new employees will only be allowed in once a government inspection clears the facility, the company said.

Foxconn said that they “will continue to communicate with employees and the government to prevent similar incidents from happening again.”