by Ediri Oyibo
in Nigeria, Trending
Reading Time: 2 mins read
A A
122 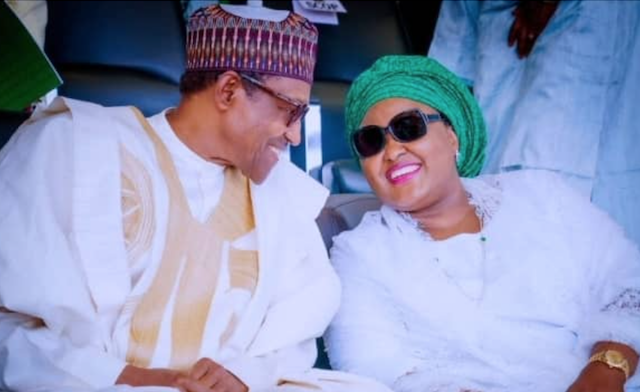 An ‘anniversary picture’ of President Muhammadu Buhari and his wife, Aisha, has continued to attract attention and comments on the social media space as the week under review witnessed Nigeria’s colourful 62nd Independence Day Anniversary parades.

The picture described as the ”best pix from the anniversary celebration” was released by one of the President’s Personal Assistants (Photography) on Saturday.

A social commentator and Abuja-based media practitioner, Mr Lawrence Olaoye, described the picture as ”a display of love in the first family”, adding: ”This is the demonstration of solid family base. This is an award winning picture”.

Juliana, another admirer of the first family’s picture, who commented from New York, United States, simply said:  ”I just love this” while referring to the lovely picture.

The lovely picture has led to social media challenge as different pictures of couples, including that of Vice-President Yemi Osinbajo and his wife, displaying similar postures were now treading in the social media space.

The first couple were captured in the picture when the president, on Saturday, led dignitaries including Osinbajo, former President Goodluck Jonathan, several other local and foreign dignitaries to witness the  Nigeria’s colourful 62nd Independence Day Anniversary parades.

The event was held amidst watertight security at the Eagle Square, Abuja, on Saturday. It witnessed colorful parades and a display of a high sense of professionalism by members of the Nigerian Armed Forces.

The president had earlier addressed Nigerians on the occasion of the 62nd independence anniversary. He assured citizens that their resilience and patience would not end in vain as his administration continues to reposition and strengthen the security agencies to tackle nation’s security challenges.

Buhari said that he shared the pains Nigerians were going through while commending their resilience in the face of challenges. Buhari had also commended Nigerians for giving him the opportunity to lead the country both in 2015 and 2019. He added that he had delivered on most of the promises he made to the people in the last seven years.

Buhari also reiterated his appeal to the striking ASUU members to return to the classroom, while assuring them to deal with their contending issues within the limits of the scarce resources available.

According to him, the Federal Government will continue to mobilise resources both internationally and nationally towards funding education, to ensure that citizens are well educated and skilled in various vocations