U.S. accuses Russia of buying ‘millions of rockets and artillery’ from North Korea for Ukraine invasion 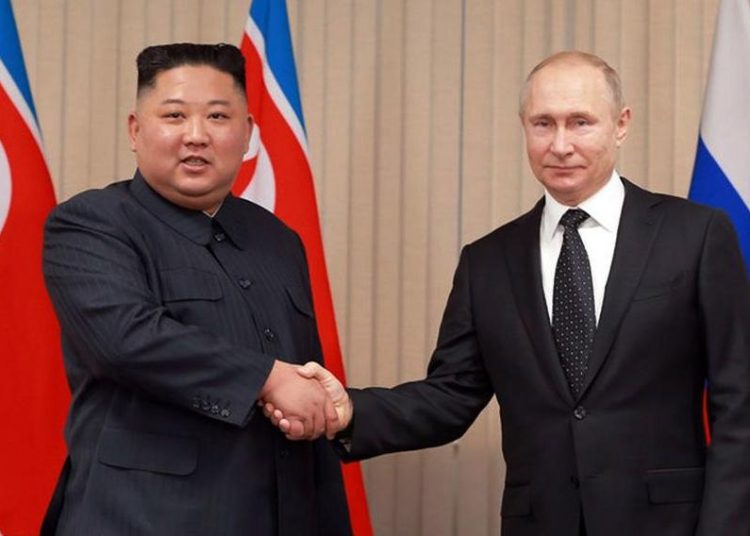 The American government has accused Russia of buying ‘millions of rockets and artillery’ from North Korea for its Ukraine invasion.

According to a recently declassified U.S. intelligence report, with few trade partners and an empty armory, the Kremlin is being forced to turn to North Korea to stock up on vital supplies to fuel its ongoing war in Ukraine,

A U.S. official pointed out that Russia’s Ministry of Defense was “in the process” of buying “millions of rockets and artillery shells” from the so-called Hermit Kingdom and that the purchases were an indication Moscow’s military “continues to suffer from severe supply shortages in Ukraine, due in part to export controls and sanctions.”

The official added that the intelligence community assessed it would likely become part of a pattern, with Russia seeking “to purchase additional North Korean military equipment going forward.”

Experts have asserted that some adverse ripple effects in the U.S.- were proving successful even as the White House resisted Kyiv’s calls to impose additional penalties against Russia by branding it a state sponsor of terrorism.

U.S. officials are watching carefully to see if a much more significant power comes to Russia’s aid

“Our sanctions, export controls and efforts to further isolate Russia from the global economy are having a significant impact, We are choking off Russia’s military supply chains,” White House press secretary Karine Jean-Pierre said Tuesday.

While North Korea wouldn’t be providing Moscow with the most cutting-edge military technology, its Soviet-era stockpiles could fill a pressing niche by restocking Russian forces with artillery shells compatible with its weapon systems developed during the same timeframe — ammunition it is struggling to supply.

“The fact that they’re reaching out to North Korea is a sign that that they’re having some challenges on the sustainment front,” Pentagon spokesman Brigadier Gen. Pat Ryder said Tuesday.

Ryder added that the intelligence on the weapons sale was declassified so the international community and the American public could better “understand the situation that Russia finds itself as they again continue to wage their campaign in Ukraine.”

So far, American officials have released little information about what – if any -action they intend to take to hinder or penalize Russia’s purchases from North Korea.

The State Department’s principal deputy spokesperson, Vedant Patel, said that the sale was a clear violation of multiple United Nations Security Council resolutions that prohibit the procurement of arms from North Korea, but he declined to say whether the U.S. planned to raise the issue to the intergovernmental organization or take other steps.

“While all U.N. sanctions are a serious violation, I think particularly concerning here is that a permanent member of the Security Council is floating these measures,” Patel said, referring to Russia’s powerful status within the body.

National Security Council spokesman John Kirby added the caveat that there was no indication that the purchase had been completed or that any arms from North Korea were currently being used on battlefields in Ukraine.

Pyongyang isn’t the only pariah Russia has sought to broker an arms deal with in recent weeks. Last month, Moscow acquired drones from Iran. A Department of Defense official told ABC News that while the Kremlin will likely seek to import several hundred more, the initial shipment performed poorly, experiencing “numerous failures.”

Weapons from North Korea and Iran might not significantly move the needle in Ukraine, but U.S. officials are watching carefully to see if a much more significant power comes to Russia’s aid.

Beijing and Moscow retain close trade and defense ties, and Russia’s invasion of Ukraine sparked concern that the two could forge a military alliance. (China officially remains neutral on the conflict.) The U.S. has warned of intense consequences for China should it sell Moscow military supplies, but so far, there’s no evidence it has violated export controls.

“In terms of what Russia may be asking of China or not, I don’t have any information to provide from the podium on that,” Pentagon spokesman Ryder said, “other than to say that, in an era of strategic competition, we’ll continue to keep a very close eye on Russia and China.”