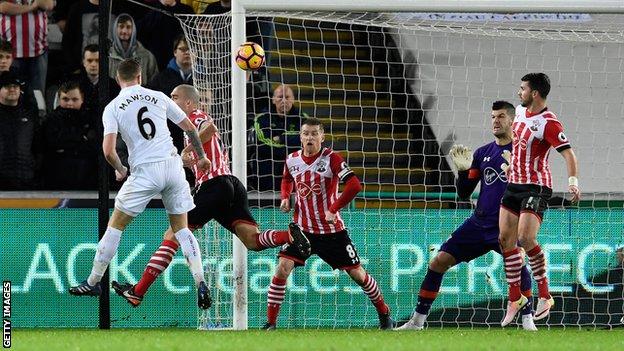 Swansea boosted their Premier League survival hopes and secured back-to-back wins for the first time this season with a spirited victory over Southampton.

The Welsh side started slowly at the Liberty Stadium but grew into the first half and led when Alfie Mawson headed in Gylfi Sigurdsson’s corner via a deflection off Oriol Romeu.

Recently installed manager Paul Clement threw his arms into the air and his side looked to have seized control but a slick Saints passing move after the break saw Shane Long prod in Ryan Bertrand’s low cross.

Long’s finish was just Southampton’s fourth touch inside the area but although they then seized the momentum, the impressive Sigurdsson struck when Luciano Narsingh – coming off the bench for his debut – crossed on the counter

They drop to 12th, while Swansea stay 17th after a timely win on a night where relegation rivals Crystal Palace also picked up three points.